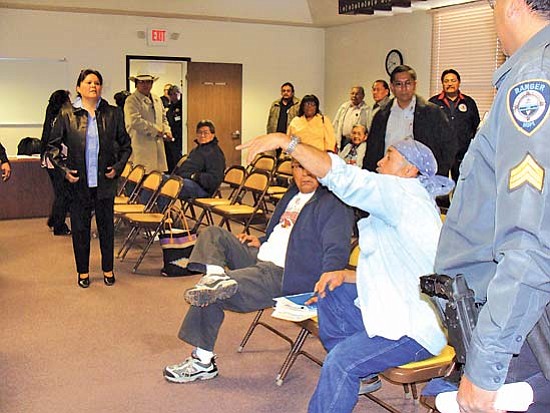 <i>Photo by Rosanda Suetopka Thayer</i><br> Hopi and Tewa community members showed up on both Monday and Tuesday, Jan. 12-13 at the Hopi tribal headquarters to protest what they felt was an illegal and unconstitutional meeting of select council members. They were met with a heavy police and tribal security presence and eventually told to leave the building.

KYKOTSMOVI, Ariz. - The past two years of heated political friction among the Hopi Tribal Council has not slowed for a moment.

The end of 2008 brought formal resignations from Hopi Tribal Chairman Ben Nuvamsa and Vice Chairman Todd Honyaoma in what they both termed as "in the interests of their tribal member's welfare."

On Jan. 12, a council meeting was called by Hopi Tribal Secretary Mary Felter along with the support of Kykotsmovi Council representative Phillip Quochytewa, who is also acting as the current council appointed Chairman Pro-tem.

This meeting is being challenged by both Hopi and Tewa community members as both "unconstitutional and illegal," according to the Hopi Constitution, specific to Article IV, Section I, which indicates that both a seated Chairman and Vice Chairman must be in place for there to be a legal council session.

Currently both of these positions are vacant.

The Hopi Constitution reads that only a tribal chairman can preside over council meetings and does not provide for a temporary "pro-tem" chairman.

A contingent of Hopi and Tewa community members showed up Jan. 12-13 to voice their opposition to the council session. They were met with a heavy police and tribal security personnel presence, which resulted in one council member being ousted and dragged from the council chambers and another Hopi member was arrested for trying to assist the council member from being injured.

Alph Secakuku, Sipaulovi Council representative was seated in the council chamber galley and was asked by both tribal security and BIA officers to leave the council chambers along with the other Hopi and Tewa community members when Secretary Felter asked for the meeting to be held in executive session.

Secakuku said he would not leave because he was an "official member of the Tribal Council who was elected by his village."

Secakuku was directed to take his seated place in the council seating area. Secakuku took his seat. Minutes later, he was dragged out of the council chambers by tribal security officers.

Pro Tem Chairman Quochytewa had ordered the officers to take Secakuku out of the chambers once all the community members were asked to leave.

Coming to Secakuku's aid, was Hotevilla village member Robin Monongye MacCartney. MacCartney was arrested and charged with disorderly conduct for assisting Secakuku when the officers took him out of the council chambers. MacCartney was due to be arraigned that same day.

Secakuku, who is a Hopi veteran and a heart bypass survivor, said, "They just grabbed me, after Phillip told them to get me out of there. BIA law enforcement will have the liability for handling me this way. I could understand if we were an opposing hostile outside group, but these are my own people. It's my own tribal members who are doing this to me."

George Mace, who is also a member from the village of Sipaulovi said, "Phillip and Mary both are impersonating officers of the Hopi Tribe and the entire Hopi community should take out a class action suit against them for conspiracy and illegal action. There are currently no legal presiding officers at the Hopi Council. Therefore, there should be no council meetings held. The community needs to stop this by demanding that their villages pull their respective representatives until the special election is held to fill those vacant positions."

An announcement earlier that morning had also revealed that the Hopi Tribe would indeed hold a special election for the positions of both Chairman and Vice Chairman of the Hopi Tribal Council in April. The primary election will be held on April 13 and the general election follows on April 20.

Though both formal and community requests have been made to Wendell Honahnie, Hopi Agency's Bureau of Indian Affairs Superintendent, to either stop the current pro-tem council or even advise the Hopi Tribe on what to do next, there is much question as to why there is always a BIA police presence at these council sessions.

BIA Sgt. Paul Sidney has been present at each of the sessions and was photo documented by Kim Secakuku's video camera when Alph Secakuku was forcibly taken from the council chambers.

"If the BIA is refusing to come to our aid or even look into the situation, then why is BIA Justice Services not looking into why their officers are assisting these people to do us Hopi community members harm by roughing us up when we are only trying to voice our tribal concerns? This just isn't right," said Valjean Joshevema, a tribal member from Old Oraibi.

A call to the Keams Canyon Agency BIA offices to speak with Honanie was responded with a relayed message from Honanie through an administrative assistant, who said the superintendent, "Had no comment at this time."

Talayumptewa did offer help and assistance in providing information on how to contact Honanie's superior for further concerns or complaints.

He said that tribal members could contact Alan Anspach, BIA Western Regional Director, at (602) 379-6600 and that complaints about the BIA police presence could be directed to BIA Justice Services, Selahongva MacDonald at (602) 379-6958.