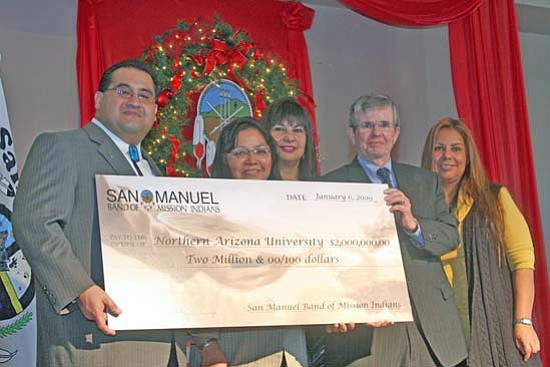 FLAGSTAFF, Ariz. - The San Manuel Band of Serrano Mission Indians has announced a contribution of $2 million to Northern Arizona University (NAU) for designing and building a Native American cultural center on its Flagstaff campus.

The San Manuel Band of Serrano Mission Indians is a federally recognized American Indian tribe located near Highland, Calif. The Serrano Indians are the Indigenous people of the San Bernardino highlands, passes, valleys and mountains.

The tribe was established in 1891 and is recognized as a sovereign nation with the right of self-government.

"We are encouraged by NAU's outreach to the Native community and are confident the center will be a source of pride for students and lead to further increases in Native enrollment and graduates," said San Manuel Chairman James Ramos. "We are especially impressed by the commitment of NAU's Native students to see the Native American cultural center become a part of the campus."

The cost for strengthening NAU's Native American programs and building the center is $8 million. The university will match tribal and private funds of up to $3 million and commit resources to the center's planning and design, allocate land for the facility, and assume full annual operation, staffing and maintenance costs. Construction is scheduled to begin in spring 2010.

The center will not only serve NAU's Native American faculty, staff, and students, it also will serve the broader campus in increasing its understanding of Native American culture, history and issues.

It will offer a network of student support services including the university's Native American Student Services, admissions support, financial aid guidance, classrooms, a computer area, a kitchen, a venue for presentations, gatherings and ceremonies, and lounges to help develop peer and mentor relationships.

The "home away from home" for Native and non-Native students will bridge traditions with contemporary education and promote a community of respect and understanding that will enhance the retention of students. NAU will work with the Native community to ensure the unique facility features sustainable design principles and traditions from Southwestern Indian cultures.

San Manuel believes NAU's proximity to government centers and several prominent Indian nations in Arizona will make the center a model for others to work with tribal nations. "An environment of this nature begs for a strong and progressive relationship between the tribes and the university," Ramos said.

"We are grateful to the San Manuel Band of Serrano Mission Indians for its generous support that will allow us to move forward toward our plans for a Native American cultural center to encourage new ideas and enhance the academic, social and cultural center for all of our students," Haeger said. "The center will underscore the vital role of cultural diversity and multicultural understanding on campus, in the region and across the globe."