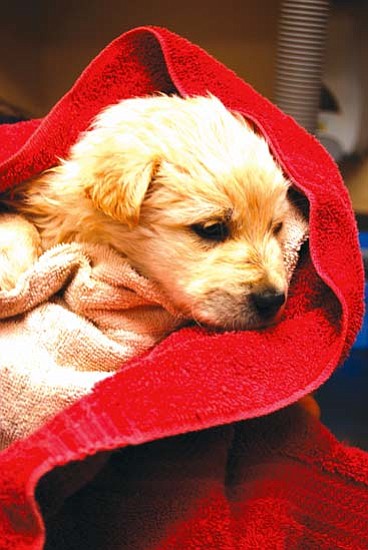 <i>Courtesy photo</i><br> Chance the Puppy was rescued on Dec. 10 after being thrown out of a moving vehicle between Kayenta and Tuba City. Anyone with information is urged to notify the county at (928) 679-8756 or call the Flagstaff Police Department Silent Witness line at (928) 774-6111.

FLAGSTAFF, Ariz. - The Second Chance Center for Animals (SCCA) and Coconino County Animal Management is seeking anyone with information about who may have thrown a puppy from a vehicle along Hwy. 160 between Kayenta and Tuba City on the afternoon of Saturday, Jan. 10. Individuals with information are urged to notify the county at (928) 679-8756 or call the Flagstaff Police Department Silent Witness line at (928) 774-6111.

Chance, a five-week-old white American Eskimo-mix survived being tossed out of the vehicle. Luckily, a Good Samaritan witnessed the situation, first thinking that the vehicle in front of him was throwing out fast food trash. He was horrified when he realized that what he thought was a white paper bag was actually a wiggling puppy.

After the puppy was thrown with force from the vehicle, the Good Samaritan immediately pulled over to rescue the puppy from oncoming traffic, almost being hit himself. He took Chance directly to the Second Chance Center for Animals for help where staff immediately rushed to care for the puppy. While Chance did not sustain any major injuries, his back legs are weak and stiff.

Chance has received x-rays and is recovering among the SCCA staff wrapped in blankets and sleeping in their offices. Chance is estimated to be about five weeks old and is otherwise healthy. SCCA staff is confident he will recover quickly. Once the SCCA veterinary team gives the clean bill of health and he receives his neuter surgery, Chance will be available for adoption.

Studies show a direct correlation between animal cruelty and other manners of violent crime. The individual(s) who tossed Chance out of the vehicle have not yet been caught.

"Somebody willing to do this to a defenseless animal can be dangerous to people. Getting the serious attention of law enforcement, prosecutors and the community in cases like this is necessary to protect our community," stated SCCA Operations Director Charlotte Peterson.