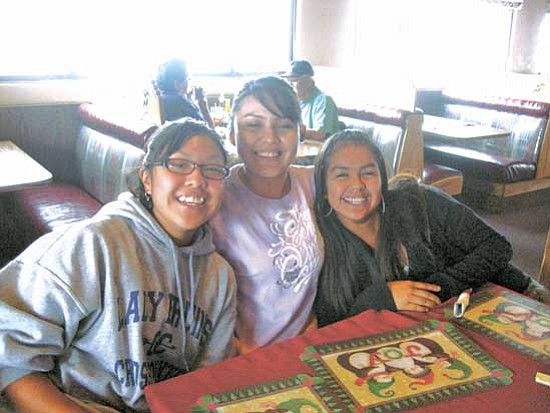 Hopi High Principal Glenn Gilman called it an incredible accomplishment that the boys have won 19 straight state championships and the girls have won 17 state titles, including one this past year under new Coach Laverne Lomakema.

Principal Gilman thanked the coaches, the runners and everyone who made the state championships possible.

Coach Lomakema said she appreciated the loyalty of the coaches and the runners as they were able to continue the tradition of winning a state title.

"It wasn't easy with a new coach. You deserve it and worked hard for it," she told her runners.

Coach Lomakema also told her runners to continue to be good role models on and off the cross country track.

Rick "The Legend" Baker, the boys coach, said winning the state so many years in a row is a big accomplishment for both the boys and the girls. He noted that some schools never win state titles and many schools win titles just once so they make a big deal out of it with parades and banquets.

Coach Baker told the runners never to be satisfied and always push themselves to reach the next level.

"You need to dominate, not just win," he said. "You don't want to just win state. You want to go to the next level."

The next level deals with national races and putting an eye toward the Olympics.

"Anybody can set goals, but what steps are you taking to reach those goals?" he asked.

Coach Baker praised the Hopi High administration for allowing the cross country teams to go to races in California and other places.

"You are privileged. Give yourself a pat on the back," he told the runners.