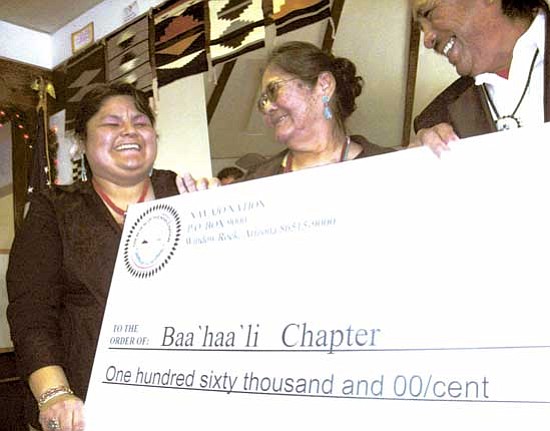 BAAHAALI, N.M. - With a unanimous vote by the Transportation and Community Development Committee (TCDC) of the 21st Navajo Nation Council, the Baahaali Chapter became officially certified under the Local Governance Act on Dec. 24.

"This is a real significant moment," said Gloria M. Skeet de Cruz, community services coordinator for Baahaali Chapter. "It took a lot of teamwork and dedication. We had to decide all together that this is what we want."

The TCDC voted to approve the Local Governance Act (LGA) certification based on a recommendation given by the Office of the Auditor General, who reviewed the Five Management System of Baahaali Chapter. Upon governance certification, the Navajo Nation Chapters are delegated governmental authority with respect to local matters. The LGA certification process is best described by the responsibilities of the three primary parties: the Chapter, the Office of the Auditor General and the Transportation and Community Development Committee.

"The Office of the Auditor General conducted a number of interviews with chapter officials and staff to ensure the system was accurate and reliable," said Helen Brown, principal auditor. "We commend the staff and their commitment to get governance certified."

To strengthen government accountability at the local level, the Navajo Nation Council enacted the LGA in April 1998. Under the LGA, all chapters are required to adopt and operate a five management system which includes accounting, procurement, filing, personnel and property.

The Baahaali Chapter is the 10th chapter on the Navajo Nation to become certified.

The community of Baahaali attended the LGA certification celebration and broke into applause when the chapter was presented with a $160,000 check from the LGA Trust Fund. The $160,000 check is an incentive for chapters to become certified.

"This is the ultimate accomplishment for a chapter," said Stanley Yazzie, deputy director for the Division of Community Development. "I encourage them to continue and be productive."

The moment was emotional for several community members and chapter house staff.

"It's a historical event for us," Emerson said. "We're working towards our vision and that is to improve the quality of life for our people in the community."

The certification has been a three and a half year process for the chapter who had to stress the importance of policies to the community. Chapter officials said community members were used to bypassing policy, but were continually reminded by chapter officials they had to enforce policy if they wanted to become LGA certified.

Chapter officials gave special recognition to Guarena M. Adeky Skeets, office specialist, for working diligently to put together the chapter's packet for LGA certification. Adeky Skeets has been working at the chapter every summer since she was 15-years-old. After completing her undergraduate degree at Eastern New Mexico University in July 2003, she returned to work at the chapter house.

"We had a good turnout," Adeky Skeets said. "We were kind of freaking out until we got confirmation from the TCDC."

"I commend the Baahaali Chapter staff and community for working together as a team to accomplish this worthwhile goal," said Speaker Morgan.

"I encourage the Baahaali community to continue setting goals for themselves. I look forward to hearing more about their accomplishments," said Morgan.

The Office of the Auditor General will be returning to the chapter in a year to do a follow-up on their system.