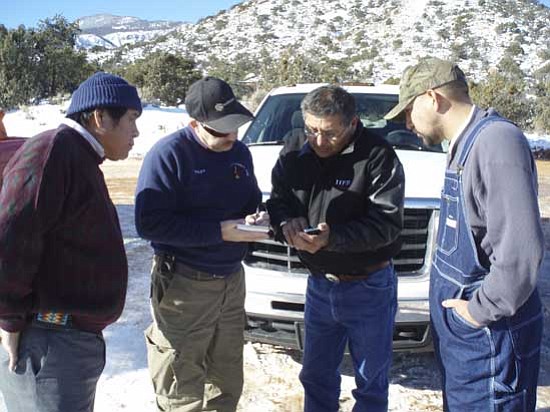 Chapter official Alex Bitsinnie said his chapter distributed bottled water to residents last Wednesday. He reported that water hauling to the tank, which is located above the school, continued. He added that much of the water line repair is done but crews are "bleeding" the water line at this time.

San Juan County in Utah declared a state of emergency for Navajo Mountain on Dec. 22. Water hauling activities began on Christmas Day. Through a combined effort, the Arizona Department of Transportation, the Bureau of Indian Affairs, Navajo Department of Transportation and the San Juan County Road Department opened the snow packed N-16 road to accommodate water delivery. The Navajo Nation Commission on Emergency Management declared a state of emergency on Dec. 29 to support continued relief activities.

On Dec. 23, people considered as high risk were relocated from the area. Residents of Navajo Mountain were advised to conserve water. The Navajo Division of Health Community Health Representatives checked on clients and reported that residents were not having any serious problems since they were aware of the water issues and prepared ahead of time.

The Oaksprings Chapter declared a State of Emergency on Tuesday, Dec. 30. The chapter is now working with Navajo Nation Department of Emergency Management to coordinate issues related to weather conditions. The Navajo Department of Transportation is assisting by clearing and maintaining roads. The main roads in Pine Springs, a community of Oaksprings, were assessed and one family was assisted with temporary relocation. Five other families are snowed in and efforts were being made to clear the main road.

The Navajo Nation Division of Health advises the public not to melt snow for drinking water use and to bring their concerns to the local chapter first. Chapter officials will then call the Department of Emergency Management if additional resources are needed.