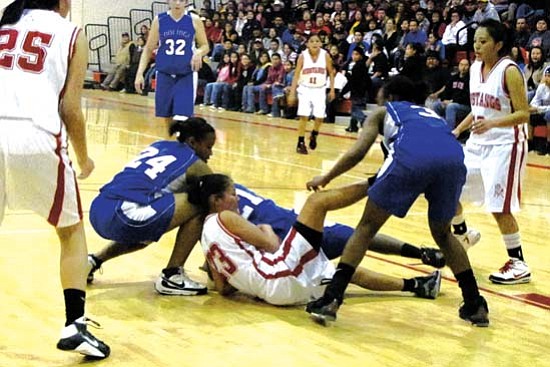 <i>Photo by Anton Wero/NHO</i<.br><br /><br /><!-- 1upcrlf2 -->The Monument Valley Lady Mustangs and Coolidge Lady Bears scramble for a loose ball during the Arizona Class 3A State Girls tournament held in Kayenta. Coolidge eventually lost to Monument Valley with a final score of 60-42.

KAYENTA, Ariz. - There were no candles on a birthday cake to blow out, but the present was more important. The Monument Valley Lady Mustangs handed their coach, Robert Nash a richly deserved birthday gift in the form of a win by cruising to a 60-42 win over the Coolidge Lady Bears.

The Lady Mustangs advance to the second round of the of the 2009 Arizona 3A Girls State Basketball Tournament. The number six ranked team will be on the road and will play the number three seeded Payson Lady Longhorns on Saturday, Feb. 28 in Payson.

The Lady Mustangs' Bradley Nash, Destinee Holiday and Crystal Todachine each scored a basket and raced out to 6-0 lead in the opening quarter. Nash scored seven more points. Mariah Gilmore, Holiday and Todachine added a bucket apiece to close out the scoring for the host team, taking a 19 to 6 lead which they would not relinquish.

Coolidge's Crystal Willis responded with 12 straight points in the second quarter, including three treys and Chantel Moss added a bucket in the paint to make the game a little more interesting. Just when it seemed the Lady Bears were making a comeback, Nash scored five more points to extend the Lady Mustangs' lead to 11 points at intermission. They led by as many as 15 points, early in the quarter, 26 to 11.

Monument Valley's Holiday, Todachine and Gilmore combined for 14 breakaway points and Coolidge's Willis had 10 points inside the paint. Moss hit a trey, in the third quarter as the Lady Mustangs continued to lead 45 to 33 at the end of the third frame.

The trio of Holiday, Todachine and Gilmore outscored Coolidge 15 to 9 in the final frame to take the next step in the 2009 Arizona 3A Girls State Basketball Tournament by closing out the Lady Bears with a final score of 60-42.

"We played a lot better this time than in our first meeting," said Coach Nash. "We played with more emphasis on defense and offense."

"We were ready to play," said Bradley Nash who contributed to the offensive attack with 16 points.