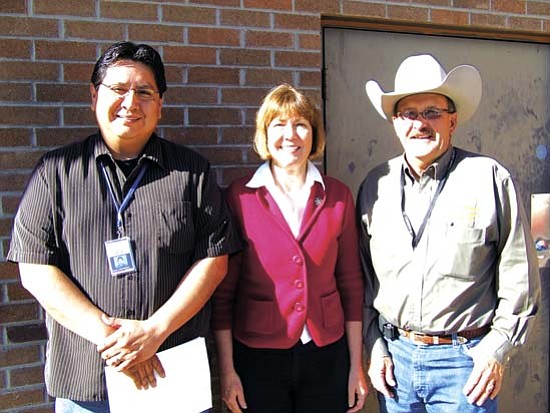 <i>Courtesy photo</i><br> Congresswoman Ann Kirkpatrick met with Navajo County Supervisors Jonathan Nez (left) and J.R. DeSpain, along with other officials from Navajo County, the city of Holbrook and the city of Winslow to discuss local infrastructure projects.

HOLBROOK, Ariz. - Congresswoman Ann Kirkpatrick met with elected officials and staff from Navajo County, the city of Holbrook and the city of Winslow to discuss major concerns including the Winslow Levee, Holbrook railroad crossing, Obed Bridge, rural school bus routes, and the Pinon and Dilkon road yards at a meeting on Feb. 19.

"Since arriving in Washington, D.C., we immediately started working on the economy and the recovery package," Kirkpatrick said. "My big concern is making sure we get our fair share of the money that's allocated for Arizona. I want to make sure it's creating and saving jobs here in Navajo County."

Navajo County elected officials and staff discussed the major financial needs facing the county, such as the Winslow Levee, the Obed Bridge, and the Pinon and Dilkon road yards.

Assistant County Manager Dusty Parsons mentioned the partnering of road yards between Navajo County and the Navajo Department of Transportation.

"Navajo County takes those roads seriously up on the Navajo Reservation," he said. "They're in bad shape."

"I've driven on those roads," she said. "And I have letters from schoolkids and photos of buses sliding off mud roads. I keep these photos in my DC office. I would like to do everything I can to help you with that."

The city of Winslow spoke of the FEMA decertification of the Winslow Levee as a major concern of the city.

"This is a real concern for our citizens, especially those who are paying increased insurance rates for living in a flood zone," said City Manager Jim Ferguson. "We stand ready to support you in any process here."

Mayor Hill from the city of Holbrook mentioned the railroad crossing in Holbrook as a major concern, as well as maintenance of school buses.

"Our school district, as well as Winslow, run our buses more than 1,800 miles a day," he said. "With funds drying up and the state mandates on the quality of education, it's far more expensive to provide this level of education in a rural setting than anywhere else."

Kirkpatrick expressed doubt that there would be any recovery money for education.

"The idea of the recovery package was to augment existing programs, not to supplant the state's responsibilities," she said. "We're doing the best we can to resolve that."