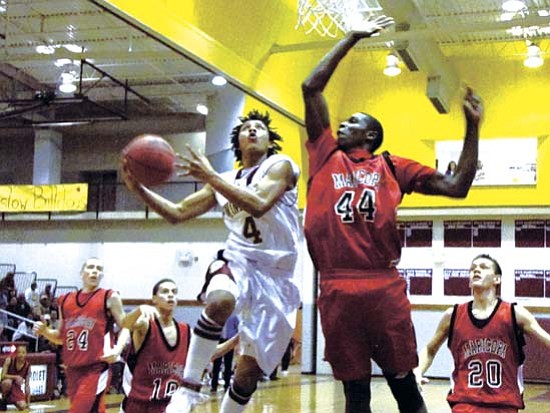 <i>Photo by Anton Wero/NHO</i><br> During the first round of the Arizona Class 3A State Tournament, Winslow’s Kraig Shirley (4) penetrates the paint for a layup as Terranie Motley (44) of the Maricopa Rams attempts to block his shot. Winslow defeated Maricopa 78 to 71.

WINSLOW, Ariz. - The Winslow Bulldogs won their first game of the Arizona State 3A Conference Championship Tournament 78-71 over the Maricopa Rams on Saturday. The victory means that the Bulldogs will meet the Window Rock Scouts again in Window Rock on Friday. Winslow improved its record to 19-11 for the season and ended Maricopa's season with an 18-9 record for the year. Window Rock defeated Snowflake 84-66 to advance and meet the Bulldogs.

The Bulldogs had a narrow one point lead at 21-20 after the first period. The next two quarters were good ones for the Bulldogs as they had built a 38-33 lead by the intermission and a seemingly commanding 60-44 advantage after three periods. Maricopa stormed back in the fourth quarter but could not get the margin within real striking distance.

The 3A North Region had three boys' teams winning their games and advancing to the next round. Winslow and Window Rock will play each other on Friday. Chinle will play Payson at Chinle.

Monument Valley and Holbrook have been eliminated.

The Winslow Lady Bulldogs advanced to the second round of the Arizona State 3A Conference Tournament with a 98-34 win over the Snowflake Lady Lobos in Winslow on Friday. The Lady Bulldogs advance to host Window Rock, a 54-42 winner over Sedona Red Rock and will host Saturday's game. The victory over Snowflake improved Winslow's record to 27-1 and ended Snowflake's season with a 15-16 record.

Four of the six 3A girls' teams in the state tournament advanced. Monument Valley beat Coolidge 60-42 and will play Payson at Payson. Chinle defeated Wickenburg 66-53 and will meet Maricopa at Maricopa.

Window Rock and Winslow will meet again in a game that will eliminate another team at Winslow on Saturday.

The Lady Bulldogs thoroughly dominated the Lady Lobos, establishing a 28-7 first quarter lead. The margin was 43-15 at the intermission and the lead was better than 50 points before the third period ended with Winslow leading 72-19.

Winslow had 14 players score including four in double figures. Kourtney Shirley led all scorers with 17 points. Cassandra Jensen had 13 points, Chrissandria Jackson netted 12 and Melissa Jacobs scored 11 for the Lady Bulldogs. Nicole Baldwin was the only Lady Lobo in double figures with 12 points.