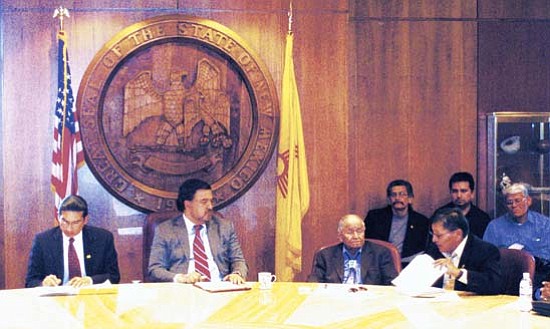 Of some $881,000 in cuts approved by the New Mexico legislature, Gov. Richardson kept $536,000 in Navajo projects moving forward.

"I urged Gov. Richardson and Lt. Gov. Denish to continue efforts to collaborate with the Navajo Nation on issues related to transportation, health and human services, and capital improvement projects," Vice President Shelly said. "This shows the benefit and precision of the line-item veto, and I appreciate the governor's saving of projects important to Navajo people."

The Vice President said New Mexico and the Navajo Nation have made notable accomplishments such as completing a CIP Master Plan, moving forward on Highway 491 construction, and making efforts to insure low-income Navajos through Medicaid and the State Children's Health Insurance Program (SCHIP).

"Working with Senator [John] Pinto, Representative Jeff and Indian Affairs Secretary Alvin Warren, the Navajo Nation Division of Community Development has done its work and helped save 64 percent of SCHIP funds from being deauthorized and reverted back to the state," he said. "These projects are important to [the] Navajo Nation, and I commend the hard-working staff of the Navajo Nation for its commitment and the Navajo Nation Council for their support."

In his message to New Mexico Speaker of the House Ben Lujan, Gov. Richardson said, "I have vetoed nine sections that would have deauthorized appropriations that will enhance the ability of the Navajo Nation and its chapters to provide and maintain basic human services and critical infrastructure."

During his visit to the Roundhouse, Vice President Shelly addressed the New Mexico Legislature during a joint session and held separate meetings with Gov. Richardson and Lt. Gov. Diane Denish.