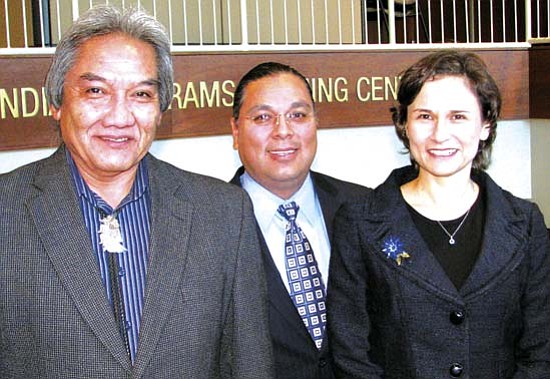 Along with Talayumptewa, Skibine named Stephanie Birdwell to the post of Deputy Director for Policy Evaluation and Post Secondary Education, and Bartholomew Stevens as Deputy Director of School Operations.

These Senior Executive Service (SES) assignments are career appointments and are highly prestigious in the area of federal service.

Before Talayumptewa worked for the Bureau, he also worked in the area of administration for the Hopi Tribe as their Chief Administrative Officer in the mid-1980s. He oversaw the construction of the Hopi Jr./Sr. High School and was there when it opened in 1986. He began his career as the Business Manager of the Office of Indian Education, Hopi Agency in Keams Canyon, and was then assigned as the Education Line Officer for the Western Navajo Agency in Tuba City.

He has held several major senior positions within the BIE's central office in the capacities of Acting Deputy Director of Office of Indian Education, Special Assistant to the Director and also Acting Assistant Deputy Director for Administration.

Talayumptewa holds an undergraduate degree in personnel and industrial relations from Utah State University and his masters in human resources.

Also a veteran, Talayumptewa is a commissioned officer at the rank of 2nd Lieutenant in the Army and served as First Lt. in the Army Reserves with an honorable discharge in 1981.

In a phone interview, Talayumptewa said, "As the Assistant Deputy Director, I will head up the Administrative Division of BIE and supervise five major functions: Budget, Finance, the Native American Student Information System (NASIS), Facility Operation and Maintenance and the Suspected Child Abuse and Neglect (SCAN) program.  One of the major objectives of the restructuring of the education function was to develop a structure to allow the Education Line Officers to become more focused on educational leadership rather than focusing on administrative issues."

"My office will provide administrative support to the Director, BIE and allow new and improved educational initiative implementation and the monitoring of all funds allocated to the BIE," he concluded.