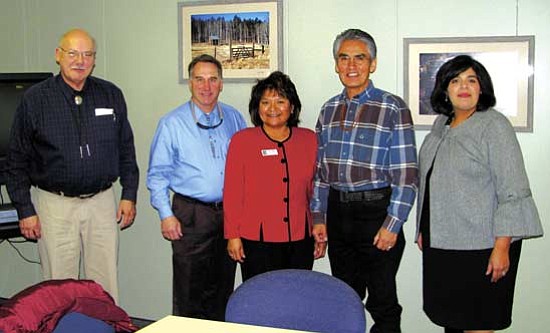 FLAGSTAFF, Ariz. - Navajo Nation President Joe Shirley Jr., the Coconino County Board of Supervisors, and the city of Flagstaff met casually at the county offices last Thursday and agreed to work in a spirit of cooperation, partnership and collegiality.

"I always try to reach out to governments surrounding the Navajo Nation," President Shirley said. "I'd like to see that continue. I know a lot of my people are here, too, so what can I do to help?"

Flagstaff Mayor Sarah Presler, Burke, Peru, Supervisor Fowler and District 4 Supervisor Mandy Metzger traveled to Window Rock on Monday to meet with President Shirley. However, because Shirley's State of the Navajo Nation address to the Navajo Nation Council was delayed, the meeting was re-scheduled.

There are 12 Navajo Nation chapters within Coconino County.

Chairman Ryan told President Shirley that the county shares a concern with the Nation about the possibility of renewed uranium mining near the Grand Canyon and the fate of "downwinders." Vice Chairwoman Archuleta said the county is also concerned about the delayed construction of new Tuba City Boarding School facilities and the lack of jail space on the Nation.

The supervisors said they would be pleased to advocate on those issues when in Washington, D.C. President Shirley said he would send word to have the Nation's Washington Office assist them when they're there.

Another issue of concern is the proposed North Central Arizona Water Supply Pipeline that potentially would run from Lake Powell to Flagstaff through the Navajo Nation. An appraisal level study has been completed.

Peru told President Shirley that the county is reaching out to communities. He said he had just returned from Page where residents expressed excitement about the future and asked for greater understanding of cultures and border community issues.

President Shirley told the supervisors that he served as an Apache County supervisor for 18 years, stepping down to assume the presidency of the Navajo Nation. He said that by working together, the Nation and Coconino County will complement each other for the benefit of residents.

He said that the Navajo Nation is a world unto its own that cannot accurately be compared to another. He said that despite the pressures of the outside world to have Native people conform to its dictates, "we don't want to be changed. We like who were are."

"It's a whole other world, and if you can understand that, you'll get along well," he said. "But we also have needs. You know our plight. You know what our schools look like, what our chapter houses look like."

He said the problems that governments face are best resolved cooperatively rather than through confrontation or struggle.

"The problems were here before any of us got into office," he said.

"Government is forever but we have to do what we can while we're here. I look forward to working together."

Supervisor Fowler said there was a sense of partnership and alliance forming among the county, city, communities, and now the Navajo Nation.

"Everyone is eager to work with constituents," she said. "We've been going through orientation and talking about partnerships."

President Shirley told the supervisors that education has been the Nation's top priority but now putting people to work will be its top concern.

"Let's work together to alleviate some of the hurt out there," he said.