PDA monitors for diabetics to debut this month 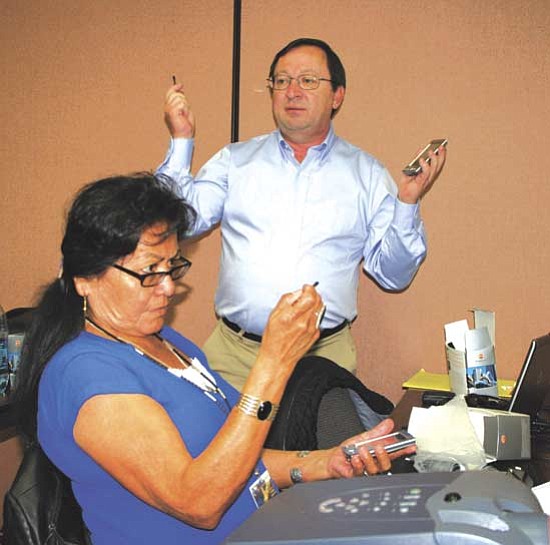 <i>Courtesy photo</i><br> Emma Yoe, a senior community health worker from Chinle works with a PDA while George Purvis of Space Data Corporation explains how to use the monitors during training for supervisors and staff of the Navajo Nation Special Diabetes Project (NNSDP) on Jan. 28.

The workshop was held at the Navajo Nation Museum with NNSDP staff from Chinle, Dilkon, Kayenta, Pinon, and Tuba City who will be involved in the pilot project scheduled to start this month. The pilot project will run for several weeks before more-extensive involvement by more diabetes clients begins in late spring.

"It was nice to finally go through the PDA training that we've waited for during the past several months," said Genevieve Davis of Dilkon. "We are anxious to get started and use this technology to assist our clients in remote areas in and around Dilkon community."

"We are excited and ready to get this project going in our area in the Kayenta Service area," said Rosita Tsosie. "We have a couple clients for the pilot project and another 50 waiting when the project gets into full gear."

The supervisors and senior community health workers said that they might have to review some of the selected clients to make sure that they will be able to operate the PDA. The clients will need to take their blood-glucose reading three times a day and then punch their numbers into the hand-held PDA, which will send the numbers to a data base center. They will also be able to text message their health worker if they need immediate assistance.

Everyone said they have been anxiously waiting for the balloon project to literally get off the ground.

The project was delayed before the USDA grant award of $425,000 was received because a company had to be selected through the Navajo Nation's Request for Proposal (RFP) process. Once the Space Data Corporation was chosen, contracts and agreements were drawn up for approval, which took several months. The final contracts were awarded in November and the company began working on the development of the pilot project.

The next step will be the delivery of the PDAs for the clients and training, which is scheduled to begin today. The proposed launch day of the balloon for the project has been set for Feb. 23.

For further information about this project, you may contact Patricia Begay or Robert Nakai at (928) 871-6532.