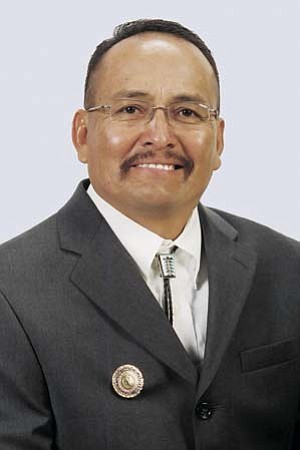 "I was pleased to accept the position of treasurer for the AIGA and I look forward to the work we will be doing to further advance tribal communities through Indian gaming," said Chee.

Chee, serving his fourth term as a Council delegate, currently serves on the Intergovernmental Relations Sub-Committee on Gaming. Chee is one of four tribal leaders who was voted in on the executive committee and accepted the voluntary position.

The AIGA serves as a clearinghouse and educational, legislative and public policy resource for tribes, policymakers and the public on Indian gaming issues and tribal community development. It is a non-profit organization and has a membership of 19 tribes representing 90 percent of Indian people living on reservations in Arizona. The AIGA was established Nov. 21, 1994, by Arizona tribal leaders.

Chee was heavily involved in the recent five-year gaming compact review negotiations with AIGA and the state of Arizona Governor's Office. The agreed upon amendments and appendices were approved by the Intergovernmental Relations Committee on Jan. 5, and was signed by then Arizona Gov. Janet Napolitano on Jan. 12.

"Navajo is a big player in Arizona gaming now and it is important we have Navajo interests there," said Chee.

The AIGA is committed to maintaining and protecting Indian sovereign governmental authority, as well as protecting and promoting the general welfare of tribes striving for self-reliance by supporting tribal gaming enterprises on Arizona Indian lands.

"The Association is committed to advancing the lives of Indian peoples - economically, socially, and politically - so Indian tribes in Arizona can achieve their goal of self-reliance," said Sheila Morago, executive director for the AIGA.