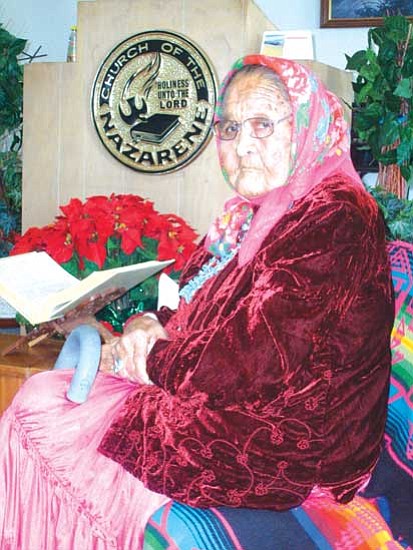 LEUPP, Ariz. - Dorothy Cody has seen her share of life's joys and heartbreak - and at her advanced age, she has seen far more than most. Cody turned 95 on Dec. 25 - and her family, friends and community members helped mark that achievement at the Round Cedar Nazarene Church not far from her life-long home.

Former U.S. Senate candidate Mary Kim Titla has been a family friend for years, and she and her husband John made the trip from the valley to honor Dorothy.

"It's quite a feat to live that long as an Indian person," Titla said.

Grandson Leonard Chee - who serves as one of the chapter delegates for the communities of Leupp, Birdsprings and Tolani Lake - shared a humorous story involving his grandmother and his attempt to reunite Dorothy with her estranged husband.

"They were both alone later in life. He only lived a half a mile down the road," Chee laughed. "I got my courage up and went to her and asked her if she would consider reuniting with him. Her response was, 'No, I'm too old!' I told her I was only suggesting they get together to share a cup of coffee or something like that."

Chee concluded by sharing the respect he has for Dorothy's faith and wisdom; something she has held her whole life, he said.

Dorothy Cody was one of the first members of the Round Cedar Church, according to founding pastor Alex Riggs. Dorothy's husband was a medicine man, and was against her practice, Riggs explained. Despite his displeasure, Dorothy continued to attend church.

"That takes a lot of determination," Riggs declared.

He went on to compare Dorothy to a famous verse from the Bible.

"Who can find a virtuous woman? For her worth is far above rubies," Riggs quoted.

"She's a pretty woman," daughter Maybelle Cody said of her mother. "She is always positive. I don't know how we survived the hard years. My mother, sister and brothers all had artistic talent; I really didn't have a talent, so I was determined to go to college and get a degree. Through the encouragement of my mother, I was able to turn my life around."

Maybelle said that she had gotten a great deal of strength and "a small piece" of the talent her mother possesses - and that whatever parents do as individuals, their children pick that up.

"My daughter recently told me, 'Mom, you are my role model.' I've set an example for my children, and I got that example from my mom."

Jane Dempsey, another of Dorothy's daughters, told how her mother had taught her about becoming a mother first hand - the hard way.

"My mother was to have a baby," Jane said. "She wanted me to come with her to get the sheep - why she was interested in getting those sheep at that time, I didn't know. But we went out, and at one point she asked me to wait for her. When we got back to the house, she told me to throw a rope over a pole. I was only three years old, and I was crying. But she made me get a sheep skin and put it down, and then she held onto that rope and had me put my arms around her and push - and she gave birth! It was the first live birth I'd ever seen.

"I remember how strong my mother is - she is still a strong person," Jane continued. "I love her, and I'm glad she's lived this long."

Jane went on to thank her mother for the teachings she had shared.

Son James Cody, who had helped conduct the service proceeding Dorothy's birthday celebration, shared how he had taken his mother on many trips around the United States in his work as a master artist.

Margaret was one of Dorothy's daughters who became very successful in the rug weaving skills she learned from her mother.

"It's amazing, this lady," Margaret said. "I've never heard my mother get mad at me. She is the sweetest lady."

Margaret went on to explain that although she has lived a hard life at times, even in the deep south of America, her mother was there to support her, and now she is home for good. She expressed her gratitude that her mother had gotten support from family, as well as three sponsors from other parts of the country. She also expressed her gratitude to community member Alfred Tsosie, who brings meals to Dorothy through the Meals on Wheels program.

"That is how we are supposed to take care of our elderly," Margaret said. "It's good to see people hauling wood with their elders, or to see them in town with their elderly relatives.

"I'm 53, and I'm still sleeping with my mother," Margaret concluded. "I've heard her pray in the middle of the night, and I've felt a presence there."

Dorothy expressed her feelings to the many people who had turned out to honor her.

"Thank you, Jesus," Dorothy said in a tremulous yet strong voice.