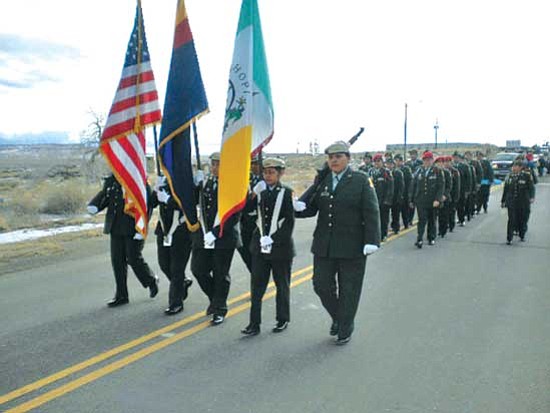 On Dec. 12, the JROTC program marched, chanted, and presented for the raving crowds and on-lookers, as well as the judges whom were keeping scores of the parade participants and floats.

Everyone was very pleased and amazed with how well the JROTC cadets represented themselves, their school, and the JROTC program.

The cadets started their "parade" day by arriving in Kykotsmovi village at around 12:30 p.m., with just 30 minutes to warm up and get in the parade and jolly spirit. Although it was not a cold and snowy day, the cadets were still motivated and ready to march. But they quickly did and were pumped up and all ready to go by 1 p.m.

The Bruin Battalion was led by the banner carriers, which was then led by the JROTC Honor Guard team.

They chanted along to all the Hopi JROTC chants. They started with "Motivated" to get them motivated and having the pitch and volume they need to impress. Then they ended that and went to "1 through 7," "I get a line," "Batman," "Hey Hopi," "H-O-P-I," and "Hip Hop Lollipop."

When they get to the judges stand, the Bruin JROTC Color Guard Team presented colors. Then, the Bruin Battalion came forward, presented their "Christmas Special," which was the wonderful and infamous, Elmo. He sang a jolly Christmas song and they ended their performance with their Famous "Hey Hopi" Chant for the judges. They were, indeed, impressed and enjoyed the performance.

"It was a warm and calming day to march in a parade, especially a Christmas parade, which is expected to be cold and snowy," said Cadet 1st Lieutenant Marty Adams.

"It was fun and I got a little bit of shivers as we edged our way to the judges stand," said Cadet Command Sergeant Major Amber Naha. "We did a good job in front of the judges though. I was proud of the cadets and everyone else for doing a good job."

As relieved as the cadets were, they finished out the parade with an excellent performance and calmly enjoyed a nice meal of sub sandwiches from the deli in the Kykotsmovi Store. They left with happy and heart-warmed feelings. It was a nice day for the cadets, the crowds, and audiences at the parade.