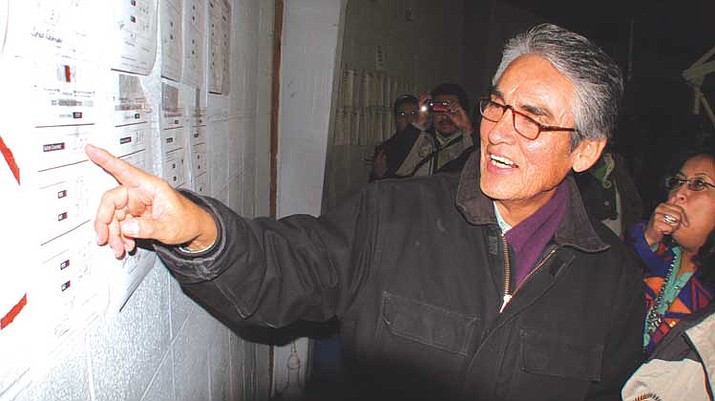 WINDOW ROCK, Ariz. - Navajo voters went to the polls in a historic election on Dec. 15 to overwhelmingly support reducing the Navajo Nation Council to 24 members and giving the President of the Navajo Nation line item veto authority.

"It really makes my heart glad," President Shirley told the Associated Press by phone from the Navajo Sports Center where vote tallies were being phoned in from chapter voting precincts. "I don't think there's going to be any challenges. They could try. But, you know, when the people speak, that is it."

President Shirley, First Lady Vikki Shirley and their children arrived at the sports center at about 9 p.m. with about 90 chapters having reported in, and after having attended their son's basketball game in Chinle. President Shirley was greeted with cheers from about 250 people there.

As the tallies came in after polls closed at 7 p.m., the cumulative results appeared on large computer monitors and paper tallies were taped to the walls and organized by agencies. President and Mrs. Shirley walked around the room to look at each agency and chapter result.

"This is history in the making," he stated. "I feel like I have helped to write the Navajo Nation history at this juncture, and that makes me very glad, very happy, not so much for myself. Certainly I'm a part of it, but more for my people. I feel like we've gone where we should have been a long time ago."

President Shirley said the election results have shown the Nation's leadership that the people do believe it is their government.

"The leadership is going to know that the people mean business," he said. "It is their government."

President Shirley said this election and these initiatives are just a start toward reforming the Navajo government. Next to come, he said, could be a more comprehensive government reform, and perhaps more elective offices such as attorney general and Navajo Nation treasurer, both whom could not be threatened with firing by the Navajo Nation Council.

Now that the people have approved reducing the council, the next step in the process is to develop a reapportionment plan for 24 delegates, he said. That will be done by the Navajo Election Administration, approved by the Navajo Board of Election Supervisors and forwarded to the current council to debate and approve.

"This is a long time coming, and now they've proven it," President Shirley said. "The people wanted government reform. They started it. I think there's going to be comprehensive government reform in some fashion."

The President also stated that there wasn't one single factor that swayed voters to support the initiatives but said he believed they were persuaded of the need for it over time with news reports of the mismanagement of council delegates' discretionary funding, council committee trips to Las Vegas, motorcycle trips to Washington, D.C. that produced little results, gold rings for delegates, and, most recently, placing the President on leave without giving any reasons.

"I think that pushed a lot of people to [vote for] the 24," he said. "So it's just a lot of things coming together, and this is the result."