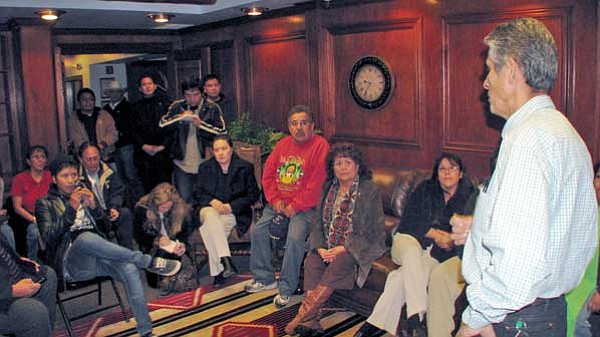 <i>Courtesy photo</i><br> President Shirley meets with about 25 supporters, staff members and reporters at the President's office after it was announced that the Window Rock District Court declared the resolution placing President Shirley on administrative leave "null and void, and therefore unenforceable."

Following a four-hour evidentiary hearing, District Judge Geraldine Benally ruled that the Navajo Nation Council and Speaker Lawrence T. Morgan acted beyond the scope of their authority when they attempted to place President Shirley on administrative leave, which robbed Navajo voters of their chosen leader, and silenced their voice by silencing his.

"Because they acted outside the scope of their authority," said Benjamin C. Runkle, one of President Shirley's attorneys, "the resolution placing the President on administrative leave was declared by the court to be null and void, and therefore unenforceable as a matter of law."

As news of the court decision spread, President Shirley gathered with about 25 supporters, staff members and reporters at 8:30 p.m. at the President's office.

"It comes from the heart when I say it's good to see you," President Shirley told them. "Thank you for having been there for me, my wife and my children, and certainly for the office of the people. We've gone through some very trying and challenging times but as far as public office goes, politics, sometimes you have to go through some of these things to get at that which is good. And I believe we'll be getting at that ... tomorrow."

Sen. Albert Hale, the President's lawyer in legal challenges the two initiatives faced, said all of these weeks of controversy and even the government reform election could have been prevented had Speaker Morgan and the council abided by the Aug. 13, 2008, memorandum of agreement with President Shirley.

"If the Speaker and the council kept their words when they reached an agreement with the President, all of these could have been avoided as well as the litigation that has been very costly to both sides," he said.

"We have a structure that is set up and stable," he said. "It just took a while but it's the Navajo concept of harmony. It got pushed but it's resilient and started pushing back to its position."

Runkle said that after hearing from the President's attorneys and the Office of Legislative Counsel, the court permanently prohibited all of the parties - meaning the Speaker and the council - from attempting to enforce the resolution that placed President Shirley on leave.

It is possible the council could appeal the decision but Runkle said he did not believe the court's decision will be reversed.

"I feel confident in an appeal that the result will be the same," he said. "By the evidence, the council acted outside its authority and it can't cloak itself in sovereign immunity where it takes action in violation of the law and the dignity of the executive office."

President Shirley's attorneys - Runkle, Paul K. Charlton, and Kiersten Murphy of the Gallagher & Kennedy Law Offices, and Michelle Dotson of the Office of the President and Vice President - argued that the council did not have the authority to place the President on administrative leave because the statute that it used conflicts with the separation of powers inherent to the three-branch form of government.

They said that the council also did not follow procedures under the law in order to enact the resolution. Because of that when it enacted this legislation, it falsely tried to call it "an emergency."

Further, it twice tried to punish the President for his government reform initiatives through legislation. The first attempt was when it tried to legislatively abolish the Office of the First Lady. When the legislation was brought before the Government Services Committee, the committee killed the legislation. The second attempt was when it tried to abolish the President's Executive Protection Detail but failed to submit it to the Government Services Committee as required by law.

"You can here see a clear intent of the Speaker's office to punish the President with legislation for his policies, to retaliate against him," Runkle said. "When a legislature tries to punish somebody outside the court system, they're acting outside the scope of their authority."

"In this case, by using these secret procedures, they effectively robbed the people of their chosen leader when they put him on administrative leave," Runkle said. "They silenced his voice and he could no longer speak for those who elected him into office."

President Shirley expressed his appreciation to the law firm of Gallagher & Kennedy, and to his friend Paul K. Charlton for stepping forward to take the case on his behalf.

He said from the moment 48 council delegates acted to place him on leave, he believed they should not have done it, and that they did not do right.

"It should never have happened in the way that it has...because there's really nothing there to base it on," he said.

Nonetheless, he said he has been working throughout the six weeks of leave by visiting chapters to educate the public about the two government reform initiatives.