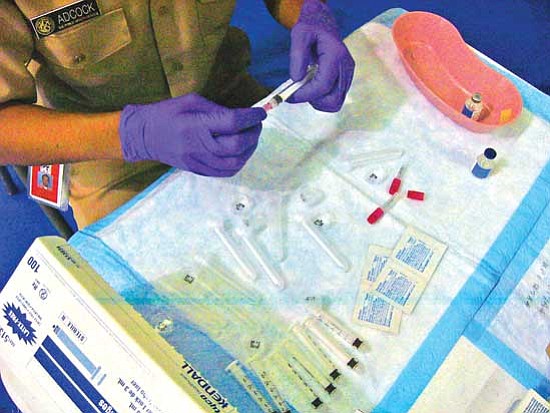 KEAMS CANYON, Ariz. - Vaccinating every possible child on the Hopi Reservation might seem a daunting task, but the staff at the Hopi Health Care Center (HHCC) is up to it.

To date, every student on the Hopi reservation between three to 18 years of age has been offered the H1N1 vaccine. The staff and students of Hopi Jr/Sr High School received their vaccinations on Nov. 24.

Children of this age, school staff and individuals with chronic illnesses are considered high risk, and are the first targeted for vaccination, according to Lisa Lomavaya, volunteer program coordinator at HHCC.

"There is a shortage of the vaccine," Lomavaya said. "Health care providers are vaccinating the high risk individuals first."

Keith Adcock, deputy chief pharmacist, served as the incident commander for the vaccination effort. He oversaw the efforts of the other pharmacists on site at the high school since the syringes used were not pre-filled and had to be filled on site.

Vaughn Sieweumptewa served as the logistics supervisor of the event.

"Our goal is 125 vaccines per hour, and I believe that we are moving at that pace, Sieweumptewa said."

Sieweumptewa, who also serves as security manager at HHCC, as well as emergency services coordinator, explained that HHCC has been providing vaccination clinics for seasonal flu over the past three years. This experience has served the HHCC staff well.

"The personnel are very familiar with the routine on a much larger scale," Sieweumptewa explained. "We are all ready for such an operation - the staff is very proficient."

"In previous events we transported students to the vaccination site," Reynolds said. "Having it here was more efficient, and I feel that we had greater participation. We recognize that it is the intent of the Indian Health Services to get everyone vaccinated."

"The event took a little over a week to organize here," Navakuku explained. "It's a good drill to have in a short period of time."