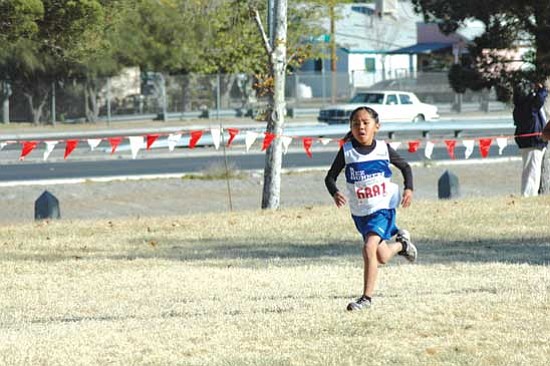 EL PASO, Texas - On Nov. 21, the Rez Runners Cross Country Club traveled to El Paso to compete in the Region X cross country meet. Region X consists of the best runners from Arizona, New Mexico, Colorado, Utah, and Texas. Sixteen out of 44 Rez Runners, ages 14 and under qualified for the National Jr. Olympic Cross Country meet to be held in Reno, Nevada on Dec. 12.

For them, this was a great first time experience to see just how good the competition is in their respective age divisions. Only five of them were able to make it to nationals. The other eleven runners that qualified have been there before. Only the top 20 individuals and the top three teams move on to the nationals.

Qualifying in the girls Bantam division (10 years old and under) was first-year club runner Jaeda Honani, age 8. She placed 14th out of 125 runners. The girls' Bantam team took fourth place and just missed qualifying. Eleven of the 15 girls from this team will still be Bantam again next year. The Bantam boys team placed 7th overall.

The kids participating in the club are from different parts of the Hopi and Navajo reservations and the surrounding area. This is the fifth year the club has taken kids to nationals. The club is growing and the kids are stepping up to the level of competition. We look to a bright future with the kids in the club.