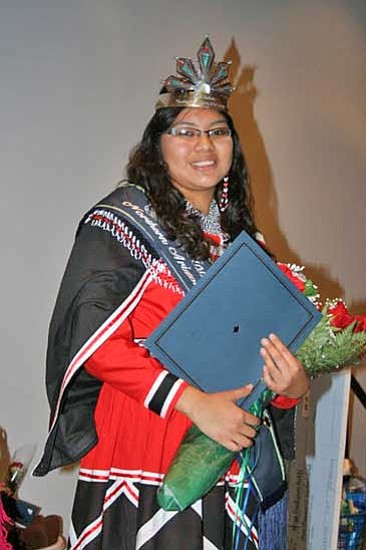 In the end, sophomore Jaymee Li Moore, 19, was crowned the new Miss Indian NAU 2009-2010 after winning over the judges.

During the actual pageant, the contestants are required to compete in three separate categories: contemporary dress, traditional dress and talent, and impromptu question.

Moore is currently seeking a BS in applied Indigenous studies, with an emphasis in policy administration and her minor is political science.

She is from the Mohave/Chemehuevi/Hopi tribes and is a member of the Colorado River Indian Tribes in Parker. Her parents are Jonathan Moore and Lynette Stevens.

When asked why she entered the contest, her response was, "I thought it would be a great opportunity to remember my college experience and youth." She also gave a special message, stating, "Always give the gift of encouragement, because you give [students] a boost to overcome some threshold that might be holding them back."

Eligibility requirements for Miss Indian NAU include being enrolled as a full-time student, between 18-29 years of age, single, never married and no children. The contestant has to be an enrolled member of a federally recognized Indian tribe or Alaskan/Hawaiian Native and must have completed a minimum of 29 credit hours with a 2.5 cumulative grade point average. They also have to write an essay explaining why they want to be Miss Indian NAU and get interviewed.

The titleholder will serve the upcoming year as a role model and leader and must be respectful, cooperative and diplomatic. She must also demonstrate leadership, communication skills and professionalism at all times.

Along with her new title and crown, Moore also won a $1,600 scholarship to help with her education.

Leandra Thomas, Diné, of Steamboat Canyon won the title of First Attendant and a $1,000 scholarship while Miss Congeniality went to Layfania Bedonie of Kaibeto.

Thomas, a junior, is majoring in elementary education with an emphasis in Navajo language. She is the daughter of Anderson and Bernice Thomas of Steamboat Canyon.

The awarded scholarships were made possible by the NAU Institute for Native Americans with additional support from other NAU departments.

(Editor's note: The name Jonathan Moore was incorrect in the print version of this article and has been corrected in this version. The NHO regrets the error.)