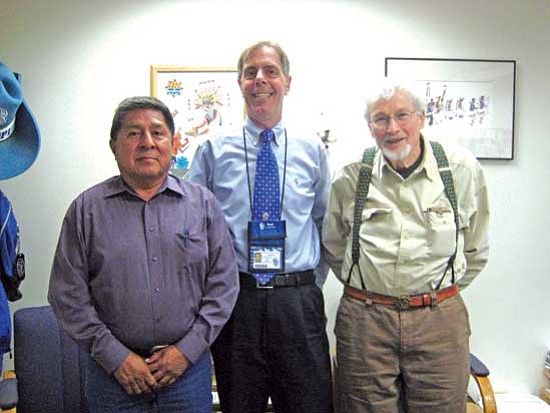 The seven studied how alcohol and drug addictions impact the brain and the impacts this has on their communities.

Dr. David Potter, a Harvard neurobiologist, made the program possible by pushing it and by getting funding from the National Institute of Health, Science Education Partnership Award (SEPA).

Hopi High was the first high school to join the program, but other Native high schools from Montana, Hawaii and Massachusetts later joined the program.

Dr. Potter said when the program started that the goal was to get Native American students into Harvard Medical School because only 20 percent attending the medical school are people of color.

Lavonne Adams, advisor of the Hopi-Harvard program at Hopi High, said the students sat in on lectures, studied cases and had to give a presentation at the end of the three-week course.

Dr. Potter taught the course along with Dr. Edward Furschpan.

Yoyokie, a senior, said it was illuminating learning about the impacts that drugs and alcohol have on the brain. She said the knowledge she gained makes it less likely that she would do drugs or alcohol.

"It has a negative impact on your life. No good can come from it," she said.

She also appreciated learning about college life and seeing what it was like to be on her own. She said it was different waking up early because of the time difference and found that the students had to get used to the humidity.

The students had to have a 3.0 grade point average, show an interest in medical science, write an essay and get three letters of recommendation in order to be accepted into the program.

Adams, who also chairs the science department at Hopi High, said the students came to understand addictions physically and mentally as well as learning about the impacts that drugs have on a community.

"I think they realized the importance of attending classes at Harvard Medical College. They know it's a real privilege," she said. "It's not a Harvard class, but it has Harvard content."

Yoyokie said she thought taking a class at Harvard was special, but the Harvard instructors told her it was like any other university.

"I still thought it was unique," she said.

Adams said each of the student's final presentations was outstanding.

"The students showed what they learned and how it impacted their community," she said. "They gave a combined presentation, but each played a part. They will also give the presentations here at school and in their communities."

Adams said the most challenging part for the students has always been the public speaking. She said they also needed to learn time management in terms of knowing when to buckle down to get to work.

Adams said the program was improved in three ways this year. First, the lectures were tailored more toward high school level. Second, all four Native schools attended at the same time. Third, Rachael Povatah, a substance abuse prevention worker on Hopi, attended to talk to the students about community issues impacted by drugs and alcohol.

Yoyokie said she appreciated hearing Povatah's stories about addicting drugs and how she wants to help the community.

"The story touched home. It made me think about how the reservation is supposed to be dry, but it's the opposite," she said.

Adams said the Harvard Medical College experience prepared the students for college life because it taught them life skills.

"Each year the students who attend this Harvard program leave with a higher confidence level," she said. "They also form new friendships with people from other communities. They learn from exploring other parts of the country. It gives them a better perspective of life off the reservation."

Yoyokie said the program would be improved if more Hopi High students could go.

"If students have the opportunity they should take advantage of it," she said. "There is so much to learn and it's really fun."

The students had some time for sightseeing as they went to Six Flags, whale watching, a New England aquarium, a Red Sox game and several historical sites.

Yoyokie said she enjoyed being in Boston and learning about the historical sites as well as meeting new people.