Things that make you go AAAAH!!! 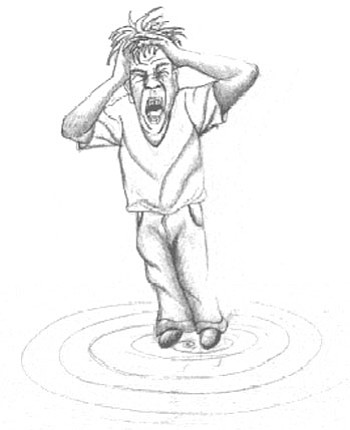 We all have pet peeves of one kind or another. Some annoy us more than others. What seems to annoy me more than the actual peeves themselves are those people who continue to commit them while seemingly oblivious to the suffering that people like me have to endure. And it really makes me wonder whether or not some of these people knowingly go out in public and do certain things just to annoy people like me - a man of little patience.

So with that, here is a brief listing of a few of my personal pet peeves separated by category (Note: I realized just now that it might be considered a pet peeve of someone who doesn't like order, but oh well...):

- People who take forever making a turn at a green arrow. You don't have to become a NASCAR driver and make the turn on two wheels and squealing tires at 150 miles an hour, but at least go a little bit faster so that the people behind you can make the turn too!

- People who sit in the middle of an intersection at a green light and then make a mad dash to make a left turn when the light turns red.

- People who neglect or refuse to use their turn signal when making a turn or changing lanes - hey, you paid for the darn thing, use it!

- People who drive just fast (or slow) enough to where you can't merge into traffic even though there's enough space in between the vehicle that just passed and the vehicle that's coming up such that you have to sit and wait as you see a dozen cars coming up the street and spaced apart the exact same way. You may as well take a brief nap until traffic clears.

- People who stop at a red light and leave enough space for a locomotive in between them and the vehicle ahead of them. What, is there a cloaked Klingon warship sitting in front of you? Close the freaking gap!

- People who drive just below the specified speed limit in the fast lane on a four-lane road or on the interstate. There's a reason why there's a slow lane on the other side!

- People who go around and around the parking lot of a store (such as Walmart) trying to find a parking spot as close to the store entrance as possible. In all the time you spend doing that, you can find a decent parking spot and be inside the store doing your shopping already instead of wasting time - and gas!

- People who take up two parking spots with their vehicle. I admit, I'm guilty of doing that myself sometimes, but I'm from New Mexico. It's an acceptable practice over in the Land of Enchantment, but I don't think that's the case here in Arizona. However, I am willing to let it slide if you have New Mexico plates.

- People with bumper stickers all over their vehicles. That's an accident waiting to happen because curious people like me will want to read the stickers instead of pay attention to traffic.

- In the winter, people who drive 10 miles an hour in a 35 mile per hour zone - in the fast lane! If you're that afraid of driving in snow and bad weather, either take the bus, take a taxi, walk or stay home!

- Undisciplined children. Parents, if you're going to take your children out in public, at least make sure they behave. If not, leave them at home, or with a friend or relative you don't really like and let the kids get on their nerves, not ours.

- People who block an entire aisle with their shopping cart. If you want to stand there and read food labels, just buy the darn thing and read it at home!

- People who carry on exceptionally loud conversations in restaurants. If I really wanted to know that much about your personal life, I'd live with you.

- Sadly, there are people in this world who are simply NOT meant to wear shorts and/or flip-flops in public. If you're one of these people, spare us the visual agony - especially if I'm at a restaurant. I want to enjoy my meal, not lose my appetite.

- People who go into fast food places and want to special order everything because they don't like the "one-size-fits-all" menu: "I want my burger cooked medium rare, minus pickles and onions with no mayo because it's fattening and no cheese because I'm lactose intolerant...oh, and I want organically grown lettuce on a whole wheat bun and no tomatoes or ketchup because I'm allergic to red things...and does your bottled water come from the elven rivers of Rivendale in Middle Earth? I simply won't drink any other kind of water..." Please...I beg you...go to the back of the line because me and the rest of the people behind me are hungry, and all we want is to do is order a freaking Value Meal!

- People who (ab)use antibacterial soap and sprays for EVERYTHING because they're paranoid about getting sick. Germs exist for a reason. If you get sick, your body WILL develop antibodies to combat those germs. So let your body do what it was meant to do naturally!

These are just a few of my personal pet peeves. Of course, I do have plenty more, but in the meantime, if you have any pet peeves of your own, feel free to comment on this article and add them to the list.

Protection bullfighter uses both brains and brawn to protect riders at rodeos
So what exactly does being middle age mean?
Remember, giving a pet as a present might be a bad idea
Knowledge is Power
Wanted: positive suggestions and ideas for Winslow Mail