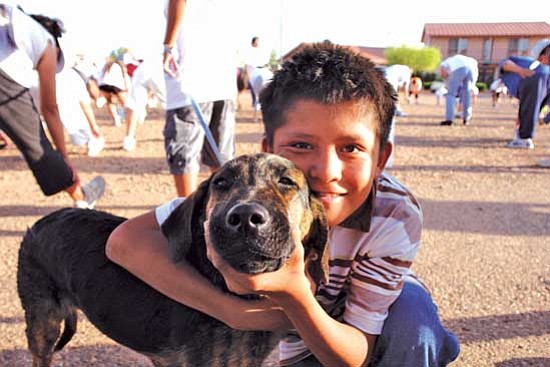 <i>Courtesy photo</i><br> A participant hugs his best friend at the LeChee "Just Move It" for the first "JMI and your Dog" event on July 21.

TUBA CITY, Ariz. - The Tuba City Health Promotion Program had one amazing summer. The 11th Annual Tuba City "Just Move It" (JMI) Series featured off-the-wall participation and new courses. "Just Move It" is an annual fun run/walk series that promotes and encourages healthy lifestyles and healthy living among various communities throughout the Navajo Nation. This summer was no exception in Tuba City. Participants, ranging from infants to the elderly, attended the events resulting in record numbers for the Tuba City Health Promotion Program. A total of 5,150 individuals attended the 2009 Tuba City JMI series. These individuals made the commitment to become physically active.

The 2009 Tuba City JMI series included several new events in addition to the 12 JMI scheduled events: there were two 10K runs, two-horse JMI events and "JMI and Your Dog" events. The theme for the "JMI and Your Dog" event was "Pack Leader: A Way of Life," which was inspired by National Geographic's Dog Whisperer, Cesar Millan, who teaches dog owners that in order to be an effective "pack leader," dog owners should display conveying, calm, assertive energy to their dogs to establish mutual respect.

The Hidden Springs JMI also paid tribute to a fellow community champion, the late Mitchell Tallman, for his outstanding volunteerism with the Tuba City Health Promotion Program. Family, friends, and participants shared a moment of silence in remembrance of their dear friend.

Even in a thundering rainstorm, the event continued as the participants completed the 3K walk and 5K run. DJ 6 Killer commented and said, "The rain [is] a blessing for the runners and walkers..." The finale event concluded with 1,266 participants.

The Tuba City Health Promotion Program will continue to promote the JMI campaign, T'áá hwo ají t'éego, meaning, "It's Up To You."

Thank you to all volunteers, program partnerships, and community participants. See you all next year.