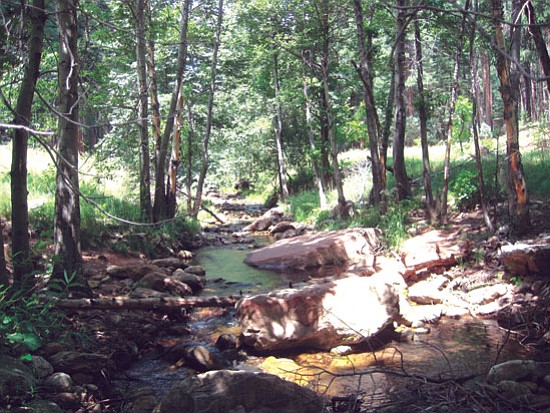 But on this recent hike it was unusually hot. Grandson Brandon Johnson said, "At least it's not a mountain hike" as the hike got underway. Before the hike was complete Brandon was talking about the heat rather than the mountains.

Most of the hikers we met on the trail were from the Phoenix area and felt the hike was literally "cool." Sure, we said, as the sweat poured off our brows. Despite the hot weather, the high altitude creek water was cold.

Horton Creek is a seven-mile hike and rated as moderate. Those wanting more can use the Horton Creek Trail to connect into either the Highland Trail or the Derrick Trail.

The Phoenix hikers started their trek earlier in the day as they were coming out when we were coming in. Obviously, the heat is hotter later in the day. You don't have to hit the trail at the break of dawn, but we didn't get to the trail until 1 p.m.

Horton Creek's cascading water did not disappoint. Less than a half mile into the hike, the creek appears and there are several short side trails that lead down to the creek where hikers can relax on large rocks all day to watch the birds, dragonflies and butterflies.

Hikers can park at the Tonto Creek Campground, walk across the road and bridge, find the trailhead across from the campground host's home and then cross down to the trail. There is a restroom in the parking area.

Some hikers turn around after seeing the streambed because it appears dry, but less than a half mile into the trek the water appears.

Those wanting to talk during the hike may have to speak loudly in places because of the mild roar of the cascading waters. Oaks, cottonwoods and sycamores offer plenty of shade on most of the trail.

The trail eventually goes up as hikers follow an old jeep trail. Columbine, monkey flower and sunflowers are among the flowers found on the trail.

Just before getting to the spring, hikers go up the old jeep road seeing the Mogollon Rim straight up ahead of them. This is an awesome sight but keep your eye on the trail because two years ago when hiking with grandson Wayne Johnson we spotted a rattlesnake on the side of the trail.

The trail leads right up to what appears to be the end of the creek, but don't stop here or you'll miss the gem known as Horton springs. Go 100 yards east and find the spring in the form of a mossy green waterfall. It's fun climbing to the top, but be careful on the slippery moss.

The only mile markers are at the beginning and end of the trail. The hike goes up about 1,380 feet in elevation starting at 5,480 feet so bring lots of water.

Famous author Zane Grey had a lodge three miles east of here and used the terrain in some of his novels.