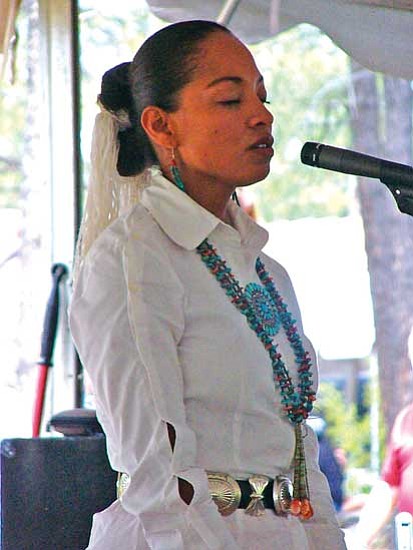 FLAGSTAFF, Ariz.-It's been 60 years since the Museum of Northern Arizona opened its doors to the first Navajo Festival. This popular event, a part of the summer series held by the museum, still pleases hundreds of visitors who come to revisit familiar artists and meet new ones. As always, there was too much to take in, with over 70 artisans and numerous presentations to be enjoyed.

Many see art as a means of bringing beauty into their homes and lives, and seldom think beyond this expectation. Others are interested in art as a vehicle to social awareness.

Alvin Marshall attracted many with his award winning sculpture. He took first place in the Sculpture division at this year's show. Marshall sees his work as a multifaceted job given him by higher powers.

Marshall is originally from Naatʼáanii Nééz (Shiprock, N.M.). He describes his gift for sculpture as God-given, and considers himself "just an instrument" of the beauty he creates full time.

Marshall relies on traditional values for his inspiration. Those values resist the title of "master" stone carver.

"Personally, I don't think anyone is a 'master'-that is a touchy subject," Marshall said. "We all have something more to learn. Everyone is gifted in his or her own right. You are your own master. I'm careful about being told I'm a master. It's a title you have to live up to.

"In Navajo, we say, 'Doojinída,' 'don't say that," Marshall continued. "This is all from God; you could lose it tomorrow. I know artists who have lost the gift. [Artistic ability] is a humbling gift that you have to take care of."

"I didn't go to college," Marshall said. "I sold my first [drawing] when I was 15-years-old. A woman ... saw my drawing, and she said, 'Alvin, that's nice. How much do you want for it?' In my mind I was thinking five dollars, but she called out $15. That's when I knew I must have something here."

He began sculpting in the early 1980s, and has made a point of collecting much of his own stone.

"You have to identify yourself [to the stone]," Marshall explained. "You have to ... look at the stone and see if it lifts your soul.

"When you look at a stone, you see something-an animal or a person. It's a spiritual connection, like love at first sight."

Though alabaster is a personal favorite, Marshall also works with marble, soapstone, limestone-"anything that is carveable."

Giving back the blessing is also important to Marshall, who donates artwork to many causes.

"It's hard because I'd love to have the money, but there is a need. People come to me and say, 'It's your fault. You are an artist; it's your job to help.' But it comes back to you. It's like being a doctor-you can't refuse to help a person in need. It is your job."

That job includes many titles; in his case, Marshall has to be a storyteller, a salesman, even a geologist.

The woman depicted in his sculpture is sitting with her legs beneath her. Marshall said that he would have liked to have portrayed her with her legs straight out, but he felt the stone would not hold up beneath its own weight without a more solid base.

When asked what advice he would offer young people considering a career in art, Marshall said, "Be yourself and go for it." He added that one had to do the hard work to become successful.

"I did my part from the beginning," Marshall said. "I did all the footwork. It's like pushing a car-at first you have to push real hard, but as it picks up momentum, you can jump in and enjoy the ride."

Redwing Nez, another first place winner who has consistently placed at the Navajo Festival throughout the years, has shown a nostalgic side with his painting, "Harrison Begay's Horse Race Dream." Nez came out on top in the Fine Art division.

The work brought Nez back to his earlier days, when he painted in the "flat" style taught to many Navajo students. Harrison Begay is well known for this style, and is an inspiration to Nez-who described the elder artist as "a modest man," who advised younger artists to take care of themselves and to have their eyes checked.

"They built a new school in Dilkon, and when I heard that the old buildings were coming down, I thought back to this style," Nez said.

"I wanted to find something to contribute to my people that hadn't been done before," Tafoya said. "I was not raised on the reservation; I grew up in California, Oregon, Phoenix, Scottsdale and Tempe. I am not traditionally centered and I can't speak my language. But I can do research and I can create, so I decided to create cultural property of the Navajo male."

Tafoya said that one of the losses he sees is a vehicle for the expression of Navajo manhood. The traditional model has been slowly consumed by more modern expressions such as the Native American Church, Christianity, and popular culture. The ideals of Indian manhood presented through movies starring John Wayne and Native Americans simply as people who enjoyed killing without defining what they were really fighting for is further destructive to Native society.

"Even the military, where Navajo men could be warriors, has been a destructive force. Many men came back as alcoholics with no place to fit in and became a burden on their families and the tribe," Tafoya said.

Tafoya shares the skills and knowledge he has gleaned with youth who are starving for such information, not only in his neighborhood, but across the Navajo Nation through workshops. These properties include bow and arrows, heavily studded shoulder bags, hats and bow guards (k'eet'oh).

"A lot of kids want to get into it, but their fathers and grandfathers aren't teaching their own kids," Tafoya said. "I've heard it time after time; men are telling me that they aren't teaching their kids because they don't deserve to learn it. The boys aren't demonstrating the ability to use it. Also, guys in their 30s, 40s and 50s are too busy trying to bring a paycheck into the house. Many men are alcoholics."

Tafoya, who sees educational leadership as his area of interest, likes making his work functional and simple-inexpensive with harmony to it.

Performing artist Radmilla Cody is another popular presenter at the Navajo Festival. The former Miss Navajo Nation spoke to the crowd about the power of negative words and reminded people to have good thoughts.

Looking at this poised, gifted young woman, one would not suspect the challenges she has faced in her own life, beginning as a biracial child living in a small Navajo community.

"Back then, it wasn't common to see a biracial child on the reservation," Cody said. "I was lucky to have my grandmother. She is my anchor. My mother considered giving me up for adoption, knowing the hardships I would face. My grandmother said there was no way, and followed my mother to the hospital, saying that she had come to take and raise her granddaughter.

"But my grandmother didn't expect this little Black baby," Cody laughed. "She was like, 'Oh, she's got a little color to her.' But she embraced me anyway."

Later in life, Cody faced the horror of domestic abuse, and spoke openly about her experiences in overcoming and surviving domestic abuse and violence.

"Today we have more people speaking out," Cody said. "Still, too many times we hear the screams and the broken glass, and we say, 'It's not my problem,' and then we hear in the morning that someone lost her life-at that point you become a contributor because you didn't do anything."

The silence must be overcome, Cody said. People need to see domestic violence like other social issues facing the world.

"We have AIDS, diabetes, and environmental issues," Cody said. "We have to acknowledge that we are all little specks on this earth, and that there is something bigger out there, and we must take responsibility."

James Bilagody took the stage and charmed the crowds with his performance of his "Economic Development Song," enlisting them to join in on the English in the chorus, "Hey boss, hey boss." The song honors a young woman who has successfully broken down the barriers-as an engineer of the Silver State Construction Company.

Many of the artisans at this year's Navajo Festival have demonstrated that there is more to being an artist than someone who creates beauty. For many of them, art is the natural expression of important social issues. Still-there is nothing wrong with supporting these gifted individuals for the sake of beauty alone.