Kendrick Mountain Trail - It's all downhill from here 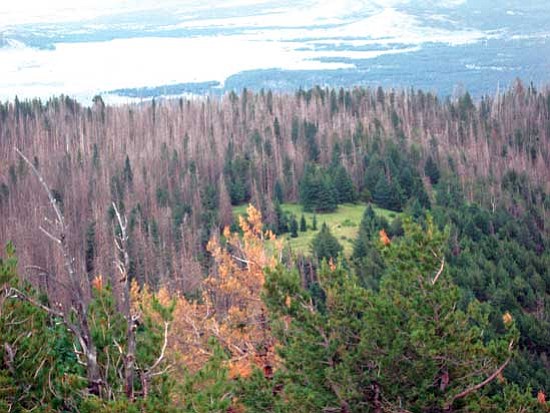 FLAGSTAFF, Ariz. - Those who like aspens, ferns and an uphill climb will appreciate Kendrick Trail leading to the top of Kendrick Mountain - the eighth highest mountain in Arizona topping out at 10,418 feet.

Watching youth experience something for the first time is always a kick. Taking radio students from Hopi High to radio conferences in other states is a kick because many of the youth are flying for the first time. This hiker had been on Kendrick Mountain many times previously, but this was 17-year-old grandson Brandon Johnson's first Kendrick hike.

We usually go on easier hikes together, but Brandon had hiked Bill Williams Mountain with me last year. The two mountains have about the same elevation climb as Bill Williams climbs 2,350 from top to bottom and Kendrick climbs 2,450. What's 100 feet among hikers?

But Bill Williams tops out at 9,250 and perhaps that 800 foot difference in elevation makes a difference because Kendrick felt much tougher to both of us.

The toughness of Kendrick depends on who hikers want to believe. Phoenix magazine rates the hike as moderate, but the Arizona Republic and the book "Flagstaff Hikes" rate it as hard or strenuous.

Both of these mountains have a beauty of their own. The Kendrick Trail was covered with firecracker red penstemon, lupines and other colored wildflowers. Aside from the wildflowers, the trail is dotted with pine trees, Douglas fir, Engelmann spruce, ferns, aspens and opens into alpine meadows. Stellar blue jays and flickers found along the trail will keep bird lovers happy.

The panoramic view from the switchbacks also made the hike worthwhile. Like most hikers on this trail, Brandon huffed and puffed, but said the climb was worth all the joy that went with it.

Not long into the hike, burned out trees from the Pumpkin Fire - which burned 15,000 acres in 2000 - were clearly visible.

Speaking to hikers along the trail, only about half made it to the top. Forest Service workers were clearing off the paths, which was appreciated since there were a lot of horseback riders on the trail this day. Many were taking supplies to the lookout tower at the top.

One highlight of the trail comes not far from the top: A one-room log cabin was built in 1912 and used as the home of the lookouts into the 1930s. For those who want to add miles to the their hike, the Bull Basin Trail picks up in back of the cabin.

The lookout tower is about one-quarter of a mile to the west. Manuel was manning the lookout post that day as he offered information and water. He said 40 visitors had already come up to the tower that day. The view from the tower leaves most in awe. The San Francisco Peaks are to the southeast, but the North Rim of the Grand Canyon and the Painted Desert can be spotted as well, along with several other mountains.

Just as we were leaving the tower, the rain started so we went down the trail fairly quickly with the help of some canopy cover.

The drive in from U.S. 180 is about seven miles, but the roadside is filled with flowers and aspens so it gives the hiker an inkling of what is going to be seen.