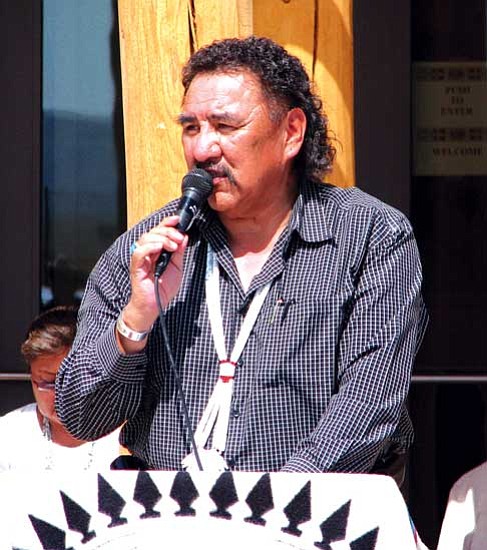 <i>Christian Bigwater/NNSO</i><br> The Navajo Nation celebrated the grand opening of the Dilkon District Court on July 31. Council Speaker Lawrence T. Morgan was a guest speaker at the event.

DILKON, Ariz. - The community of Dilkon celebrated the grand opening of its new multi-purpose district court building July 31, nearly a year after its groundbreaking.

The new 14,000-square foot complex was designed by Johnson Smitthipong and Rosamond and Associates, and is the first of its kind on the Navajo Nation. Its unique design incorporates a design inspired with Navajo tradition by incorporating the four sacred colors-white, blue, yellow and black. The facility is located on 2.3 acres of land north of milepost 55 along Route 15.

The support of the Arizona State Legislature for their help in making this project become a reality was acknowledged.

Council delegate Jerry Freddie (Dilkon/Teesto) welcomed visitors to the event and thanked those who contributed to the project.

"We must always thank our Navajo elderly first. They are the ones who keep our sacred fire going. It is for that reason and for their support this facility has become a reality for this community. This building symbolizes social order, which has deteriorated in this district and this is why we are in need to strengthen our judicial system to remedy the safety and judicial needs of our community," he stated.

Begay supported this statement by saying, "This new facility is good for the Navajo Nation and I commend our state legislators for their cooperative efforts," he said. "We were successful in securing vitally needed funding from the state of Arizona in cooperation with our legislators and with then-Governor Janet Napolitano."

Katosha Nakai, former lobbyist for the Navajo Nation and now special advisor on Native American Affairs to current Gov. Jan Brewer (R-Ariz.), lobbied intensely on behalf of the Legislative Branch of the Navajo Nation for the facility's funding.

The facility was made possible by a $2 million appropriation by the state of Arizona, through a joint effort between the Judiciary Committee, the Legislative, Judicial and the Executive branches of the Navajo Nation. The Navajo Nation also provided matching funding with the state's allocation.

The three-year process for constructing this facility began during the 20th Navajo Nation Council, one term ago, when the need for courthouse facilities became evident to serve the growing population of the Navajo Nation.

Speaker Morgan congratulated the community of Dilkon, the Judiciary Committee and Begay for their leadership in making this facility become a reality.

"Your hard work and persistence has made this day possible," he said. "It is always [good] to see progression here on our Navajo Nation. I commend the leaders from this area and the many contributing individuals that made this possible."

"There is still much work to be done," he added. "This complex is one step in that direction. With this, we must continue strengthening and improving our judicial services ..."

"This is only the beginning," Begay said. "We plan to have 11 court buildings at all 11 districts throughout the Navajo Nation and also a facility for our Navajo Supreme Court."