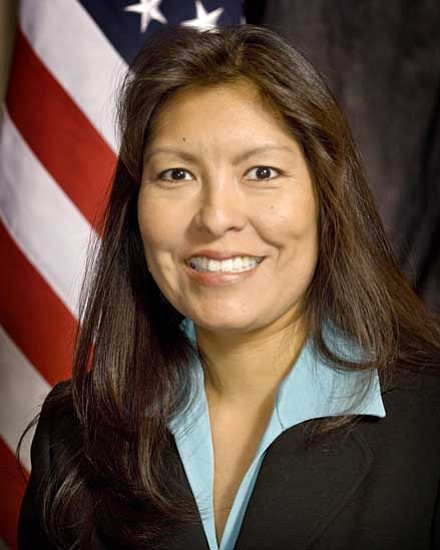 PHOENIX, Ariz. - On July 28, U.S. Attorney Diane Humetewa announced she would resign from her position as United States Attorney for the District of Arizona effective Aug. 2. The District of Arizona is comprised of the entire state of Arizona, and includes 15 counties, 22 Indian nations and the fifth largest metropolitan city in the nation.

Humetewa, a Hopi and the first Native American female to hold this position, was confirmed by the Senate and sworn in on Dec. 17, 2007.

"It has been a great privilege to serve the citizens of Arizona in this office," Humetewa said. "I am grateful to the entire U.S. Attorney staff for their daily commitment in the pursuit of justice for our citizens, and I am also grateful to all our federal, tribal, state, and local law enforcement partners whose hard work is indispensable in that pursuit. I also thank the Arizona Congressional delegation, the Arizona federal court judges, the United States Attorney General, and the President for the opportunity to serve the nation."

Humetewa started at the U.S. Attorney's Office in 1986 as one of the first victim-witness advocates in the federal criminal justice system and helped develop a victim advocacy model that was replicated nationally. She left to attend law school at Arizona State University, graduating in 1993. Before rejoining the U.S. Attorney's Office in 1996 as a Special Assistant U.S. Attorney then an Assistant U.S. Attorney, Humetewa was counsel to Senator John McCain (R-Ariz.), U. S. Senate Committee on Indian Affairs and in the U. S. Department of Justice, Office of Tribal Justice.

As an Assistant U.S. Attorney, Humetewa prosecuted violent crime cases including child sex crimes, homicides, assaults, bank robberies, and theft of cultural patrimony cases. In 2001, Humetewa was promoted to Senior Litigation Counsel/Tribal Liaison and was responsible for managing the Victim Witness Program and fostering relationships between the 21 Indian tribal governments and the U.S. Attorney's Office. Among other subjects, Diane has instructed tribal, federal and state law enforcement and prosecutors in all areas of federal criminal procedure, Indian Country jurisdiction, child abuse, and federal victims' rights laws.

Humetewa received the Executive Office of United States Attorneys' Director's Award in 1999 for Superior Performance by an Assistant U. S. Attorney. She served as an ad hoc member of the U.S. Sentencing Commission, Native American Subcommittee in 2003.

One of Humetewa's first acts as U.S. Attorney was announcing the indictment of then-Congressman Richard Renzi on 33 counts of embezzlement and the misuse of his public office for financial gain. She also oversaw the expansion of the District office to address southwest border security challenges, provided victim advocacy services to crime victims, and advanced unprecedented collaboration with Arizona's tribal nations. She has served as a key advisor to the Justice Department leadership in both administrations on border crimes, federal victim rights and Indian Country issues.

"Diane Humetewa has been a groundbreaking United States Attorney for Arizona," stated Senator Jon Kyl (R-Ariz.). "She is the first Native American woman and, as far as I know, the first victim advocate, to serve our nation in this important office. [She was] a well-respected prosecutor handling difficult cases from violent crime to serious antiquities thefts. Diane leaves office with the respect of all law enforcement and the thanks of the nation she served."

"Diana Humetewa's tenure as Arizona's U.S. Attorney will be considered a milestone as she has applied her high level of legal knowledge, experienced professional skills and dedication to the complex justice system of our times," stated John Lewis, Executive Director of the Inter-Tribal Council of Arizona. "The American Indian community proudly commends her work as a U.S. Attorney that has furthered the cause of justice for all people and improved a better understanding of justice issues in Indian Country."

Sheila Morago, Director of the Arizona Indian Tribal Gaming Association added, "Diane was the spearhead for the creation of an MOU for funding of an Assistant United States Attorney that handles nothing but Indian Gaming crimes in Arizona. This unique position is funded by the Arizona Department of Gaming through the funds from Arizona's Indian Gaming facilities and is the only position of its kind in the country. The agreement from the U.S. Attorney's Office, the Arizona Department of Gaming and the Arizona Tribes would not have been possible if it weren't for Diane's knowledge of all three entities. This agreement is a testament to the trust that the tribes have in her."

In June 2009, Humetewa was awarded the Women in Federal Law Enforcement's (WIFLE) highest honorary award, the President's Award, in recognition for the outstanding achievements during her career as a prosecutor, a crime victims' advocate and for her dedication to the training of law enforcement to enhance their response to crimes on the tribal lands.

To date, Humetewa has not announced any future plans.