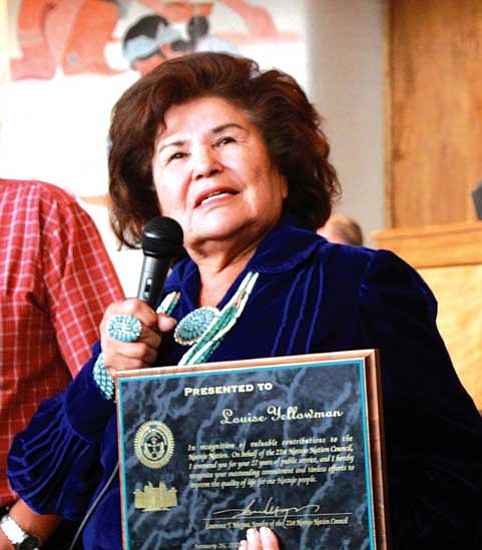 <i>Photo by Joshua Lavar Butler</i><br> Retired Coconino County Supervisor Louise Yellowman was honored with a plaque for her 27 years of public service by the Navajo Nation Council during its 2009 spring session.

Yellowman, an educator and public servant, provided 31 years of service to Coconino County - 27 of those as county supervisor.

Yellowman is an alumnus of Northern Arizona University, where she earned her master's degree in education. She was elected county supervisor in 1981.

Speaker Morgan praised her for serving county constituents and said she is a strong leader who endured many obstacles, challenges and achievements during her long career. Her major accomplishments include helping to establish a Diné College extension center in Tuba City, spearheaded efforts to build schools in Cameron and Gap, pushed the completion of the Tuba City community park and library, and helped to establish the Navajo Hopi Observer newspaper.

Prior to her career as a county supervisor, Yellowman was an educator with the Head Start program, where she helped to implement a K-4 bilingual Navajo program that is still existent in school curriculums around the Navajo Nation.

Her commitment and dedication made her the longest-serving county supervisor in the state of Arizona.

In 2008, she did not seek re-election for her District 5 seat that spans from Gray Mountain to the southern Utah border. She had a positive impact on many within her district and although many were saddened to see her retire, she says she made the right decision to spend time with her family.

"I had many good years with the county," she said to members of the Navajo Council, friends, family and well-wishers. "I have confidence that my [successor] Lena Fowler of Tuba City will continue the work that has already been accomplished and ... continue to add to that and improve it."

In her speech, she took the opportunity to thank the Council for their work to improve lives of the Navajo people and to advocate for education.

Yellowman is originally from Lupton, south of Gallup, N.M. and said she looks forward to spending her retirement at home in Tuba City with her husband Frank, her family and her grandchildren.