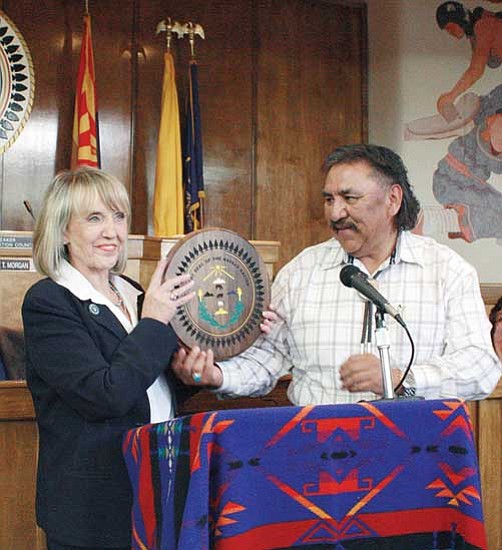 The governor was given the floor and welcomed by Speaker Morgan and LoRenzo C. Bates to the Council Chamber (Upper Fruitland).

"Thank you and good afternoon, or as you always say, Ya'aa'teeh," Brewer said to a standing room only crowd at the chambers.

"Thank you Speaker Morgan, President Shirley and the Navajo Nation's hard working staff for graciously welcoming me this afternoon."

In her speech to the Council, she explained a five-point recovery plan for Arizona in dealing with its financial shortfall of roughly $3 to $4 billion - a deficit that could accumulate to $13 billion by 2014.

In the governor's plan, her first proposal calls for reforming the Rainy Day Fund by committing and establishing a fair and honest revenue estimation process.

Second, the governor said, "We must stop adding and creating programs we cannot pay for."

Brewer proposes voters be sent a measure to improve the Voter Protection Act by allowing updates to programs that impact the general fund budget.

Third, she proposes to accept the reality that the budget Arizona has inherited will almost certainly require further spending cuts. One of Gov. Brewer's main concerns is budget cuts to education.

"My heart aches for children across this state in classrooms like those at Window Rock Elementary," Brewer said. "These are beautiful children who have enormous potential and who now rather than focus on their studies, are distracted by the anxiety of education funding issues."

Brewer stressed working together to support student development in every way regardless of funding issues. Gov. Brewer also proposed a tax reform to attract business and create more jobs.

"I am calling for a tax reduction that will begin in 2012," Brewer explained. "Then, we can begin to build a more friendly tax code that would attract investment capital and would help create high wage and sustainable jobs."

Lastly, her fifth proposal advocates for a temporary tax increase of roughly $1 billion per year, which would be dedicated to preserving education systems, critical public safety commitments and essential public health services.

Brewer's 20-minute speech to the Council was well received.

Speaker Morgan thanked Gov. Brewer for coming to Window Rock to visit the Council and presented her with a carved plaque of the Navajo Nation seal engraved with words of appreciation for her efforts to establish a working relationship with the Navajo Nation.

"We thank Governor Brewer for her help to make government more efficient and successful," Speaker Morgan said. "Our Council will continue their efforts to create stronger relationships with our state governments, that is vital for creating stronger advocacy."

Gov. Brewer thanked Speaker Morgan for his invitation and to the Council for their warm reception.

"I commend this Council and the Speaker's Office for the focus it has placed on state intergovernmental relations in Arizona," Brewer said. "We need to work together, both republicans and democrats, on a state and local level including the Navajo Nation to help get through this budget deficit."

Kee Allen Begay acknowledged and commended the Office of the Speaker for their superb work in coordinating the governor's visit to the Navajo Nation.

"The Office of the Speaker's efforts in having the governor present to the Council was much needed," Begay said. "I look forward to strengthening our working government-to-government relationships."