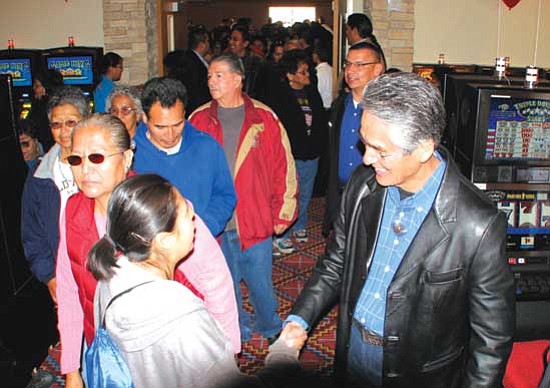 NIGA Chairman Ernie Stevens Jr., was honored for his contributions to the Boys and Girls Clubs of the Diné Nation.

"Not only has he been a strong leader and advocate for Indian gaming, but he is also been very generous," President Shirley said. "He has over the past years donated $40,000 to the Boys and Girls Clubs of the Diné Nation through his Spirit of Sovereignty."

President Shirley said the donations have been used to purchase toys and clothing during the holidays for children in need, as well as provide funding for meals and transportation for Boys and Girls club members.

The President said Chairman Stevens' leadership of the National Indian Gaming Association has helped to secure the rightful place of all gaming tribes at the negotiation table regarding legislative and regulatory gaming issues.  He said he has fought to protect Native Nations' full rights under the 1988 Indian Gaming Regulatory Act to prevent the erosion of tribal sovereignty.

"His advocacy has kept tribal government voices strong on Capitol Hill," the President said. "This results in a direct impact on the success of Indian economic development through gaming, raising the standard of living for all our Native brothers and sisters."

Chairman Stevens said he was honored to visit Navajoland, see the Tohatchi veterans proudly post the colors, and hear the Navajo language spoken throughout the day.

Bringing them together was the celebration of the success and expansion of the four-month-old casino, which figures from New Mexico now show to be the most successful in the state with the highest usage rate per machine per hour.

The casino added 133 new slot machines, which is expected to increase revenues by 15-20 percent.  It is also expected to add 20 more jobs, including slot supervisors, auditors, and front line employees.

"We set out early on to make sure that we do things right," the President said. "This means ensuring that our gaming operation is purely Navajo-controlled, meaning that we're using our own monies. That way 100 percent of the revenues generated are used for our gaming operations and for our Navajo people, and we're not giving our money away to an outside management company."

President Shirley thanked several people for the hard work to make the casino a success.

Among them were Robert Winter, CEO of the Navajo Nation Gaming Enterprise, his staff, and the our casino employees, Sean McCabe and the members of the Gaming Enterprise board, Lisa Tom, acting executive director of the Gaming Regulatory Office and her staff, and the Navajo Nation Council and Economic Development Committee for its oversight and support for the gaming initiative.