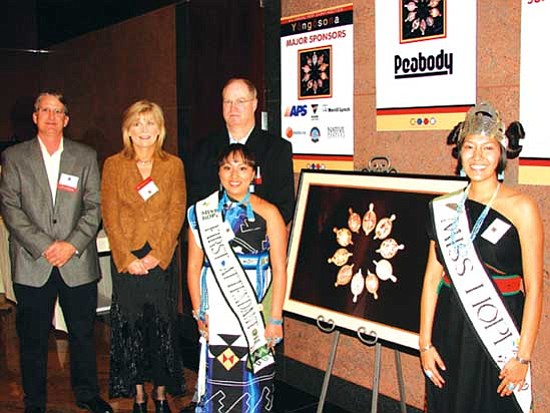 PHOENIX, Ariz. - Dozens of volunteers and more than 50 Hopi artists helped raise over $44,000 for the Hopi Education Endowment Fund (HEEF) at this year's silent auction. The sixth annual auction was held in Phoenix the first weekend of March. All proceeds will be placed in the fund and the interest generated will go towards scholarships for Hopi students and other educational programs.

The 58 pieces of art came from Hopi artists from every mesa and included katsina dolls, pottery, jewelry, sculptures, baskets, quilts, and even hand-blown glass items. In addition to the auction several items were donated by other folks and raffled off throughout the evening. T-shirts and posters were also sold at the event. All of the costs associated with holding the auction were offset by sponsorships bringing the net total raised to $44,810.

This is the biggest fundraiser of the year for the HEEF, as such, the HEEF staff selects two people to serve as co-chairs to help plan and implement the event. For this year's event the co-chairs were Eileen Egan and Gloria Lomahaftewa.

"I enjoyed the opportunity to serve as co-chair, which provided me additional insight as to the value of the HEEF in increasing financial support for Hopi youth striving to achieve a higher education," said Lomahaftewa.

She and Egan noted comments made by folks attending the event.

"The people I spoke to were impressed with the quality and amount of art work donated," she said. "It's because community members have been so generous that the silent auction has grown into such a successful endeavor and helped so many Hopi students."

One of the highlights of the auction has become the signature art piece. This year it was a collaborative effort by 10 Hopi artists. Vernon Kahe, HEEF Resource Development Manager, came up with the idea. He's also an artist and shaped nine turtles out of clay. They were given to Hopi and Tewa potters to paint in their own unique style. The collection was entitled; "Yongosona," which means turtle. It generated a lot of interest as collectors recognized the uniqueness of the effort.

"I sat by the table with the turtle collection for part of the evening and received many comments of how special it was that the artists came together to create such a stunning collection to benefit HEEF," said Egan.

"The purchasers for this year's signature piece were Becky Sawyer and David Connell, both who were attending their second HEEF Silent Auction," said Sam Tenakhongva, HEEF Marketing and Special Events Manager. He added that both of them have also donated to the HEEF in the past.

The HEEF staff is pleased with the growth of this major fundraiser in the last six years. As Tenakhongva explains, "It started as a small event with a little over 40 pieces available and no sponsors and has grown to offering one of a kind signature pieces by renowned artists, having different levels of sponsorship including a title sponsor and an ever growing number of new donating artists, raffle prizes and merchandise such as commemorative t-shirts."

Egan adds, "If people want to get involved with the auction they can donate art and other items for the raffle, sell raffle tickets, promote the event to friends and others in the Phoenix area and refer potential sponsors to HEEF staff."

Since HEEF's founding less than ten years, funding from HEEF has been used to fund more than 2,500 grant awards for Hopi college students, in addition to funding educational programs for the Hopi people. You can learn more about the HEEF and buy T-shirts and posters of the signature art piece, Yongosona, by contacting the HEEF at (928) 734-2275 or heef@hopieducationfund.org.

The HEEF is a 7871 (a) charitable non-profit organization. All contributions and donations are tax-deductible.