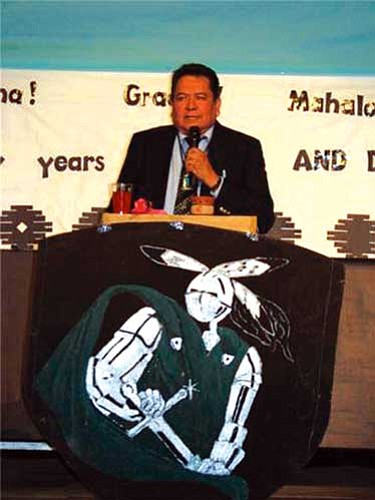 TUBA CITY, Ariz. - Like Willie Nelson, Greyhills Academy High School superintendent Andrew Tah is on the road again. Many of those that had worked with him during his 37 years in education gathered in the GAHS auditorium April 1 to bid goodbye as Tah prepared to become the Navajo Nation's newest Superintendent of Schools on April 6.

Nearly 100 people gathered at GAHS and dozens paraded across the stage to offer parting words or present gifts to Tah.

School board member Robert Yazzie noted that under Tah, the school had surpassed Arizona educational standards four years in a row.

Tah's top priority was always the students, and he never failed to stand up for Greyhills, said former school board member James Bighorse.

Max Goldtooth remembered that many of the audience members came to Greyhills as freshmen many years ago.

"Now, all those naughty students are the leaders," Goldtooth quipped.

Tah's appointment still needs approval from the Navajo Nation council, but Delegate Bobby Robbins said he was certain that Tah would be confirmed.

"It's going to be a big step for him," Delegate Harry Williams said. "It will be quite a challenge. We need to all support him, all be proud of him."

"Tah always used to make us feel special," Nez said. She said she has been to other schools and they all take the transportation staff for granted.

Everyone was upbeat, noting that Greyhills' loss would be the Nation's gain. One parent said that when he arrived at the school he was hoping Tah's departure would turn out to be one big April Fool's joke.

But it was no joke.

"It's a legacy Mr. Tah should be proud of," Annette Hemstreet said.

"I look up to him. I respect him," said Caroline Widehat, who oversees the facilities maintenance department at GAHS. She also remembered Tah as her sixth grade teacher.

Tah said his philosophy has been that if you educate young Navajos, they will return home to help their people.

"We have a lot of skills, a lot of jewels among our Navajo students," Tah said. "I've really enjoyed all these years."

In typical Tah fashion he downplayed all the accolades offered him and said he couldn't have done it without the dedicated staff at Greyhills.

"It is the staff that makes me shine," he said.