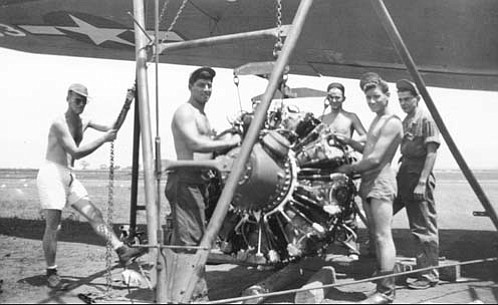 WINSLOW, Ariz. - Legendary Winslow High School Bulldogs football coach Emil Nasser had lived an exciting and heroic life before he ever came to Winslow to coach a team. He served his country in one of the most hazardous duties in World War II when he was crew chief on airplanes flying men and supplies over Japanese held Burma into our besieged ally China.

He met famed Flying Tiger General Clair Chennault while performing his duties during the war.

Most Winslow residents know of Nasser's long and hugely successful career as a coach at Winslow High School where he amassed three state championships and more wins than all but one coach in state history. He also served as the school's first athletic director and coached baseball and track during his approximately 40 years of teaching.

Nasser also ran the swimming pool for the city and filled other recreational capacities.

Few are aware of his accomplishments prior to coming to Winslow, especially of his hazardous duties during World War II. Nasser has lived in Arizona most of his life though he was born in Napoleonville, La. on Dec. 9, 1921. His parents moved to Miami, Ariz. in May of 1922 when he was just five months old and that is where he was raised and graduated from high school.

Nasser played football, basketball and track for the Miami Vandals and was offered scholarships by the University of Arizona, both Arizona State colleges at Tempe and Flagstaff and St. Mary's College in California. He chose to go to Arizona State College at Flagstaff, which later became Northern Arizona University. While there, he played both football and basketball.

Though only 16 years of age, Nasser was captain of his Miami Vandal football team in his senior year of 1938. He graduated from high school in 1939 and went to college at Flagstaff.

The Vandals had a new coach in 1938 and did not finish with a very impressive record though they finished the season strongly. The team did not score or win a game in its first five outings, but did come back to win two and tie two of its last four.

The team's final game is probably Nasser's most memorable of his high school career. Nearby Globe had an undefeated team that was 11-0 and generally considered the one of the best in Arizona. After Miami had won two and tied one of its last three games, Globe and Miami met in a special Thanksgiving Day game.

That game finished with Miami and Globe tied 7-7 and the Vandals driving deep into Tiger territory. Nasser wanted to play hard for a possible victory, but says that many of his teammates were satisfied to play for the moral victory of a tie with the best team in the state.

Nasser says that despite a less than great record,  he learned a lot from his last high school coach Nicholas C. Ragus and used much of what he learned when he started coaching.  Ragus later became an assistant at the Flagstaff college and was there in that position while Nasser played there.

The first of Nasser's four years of football at Arizona State College at Flagstaff was 1939 when he was a 17-year-old freshman. He played three years of football and basketball there before having his college playing career interrupted by military service.

The Japanese attacked Pearl Harbor on Dec. 7, 1941 and Nasser went to the recruiting office to volunteer. He had actually lied about his age and joined the Arizona National Guard when he enrolled at the college but was discharged when that deception was discovered. The Army recruiter advised Nasser to finish his junior year at the college before he enlisted. He did so and was sworn into the Army on July 14, 1942.

A series of misfortunes plagued Nasser during his time in basic training and specialty schools. He had a number of important assignments and did very well in his schooling, but was denied promotions twice when the service clamped a freeze on promotions at times that adversely affected him.

A big break that helped Nasser's military fortunes occurred at Romulus Air Base in Michigan. He spotted and eventually stopped a dangerous fuel leak in a B-24 sitting in a squadron of planes. This deed eventually became known to Lt. Charles R. Higgins who recommended Nasser for flight service and took action to get him fast promotions to make up for those he had been denied because of the freezes.

Nasser was assigned to a special Army Air Corps Project 8 that was to set up bases that would fly troops and supplies from India into China, which was fighting gamely against the Japanese. The flights would be over enemy held Burma into China, where legendary General Claire Chennault had been leading the skilled and brave flyers of the Flying Tigers against the Japanese long before Pearl Harbor was attacked and the U. S. entered the war.

Before getting to India, Nasser had taken the former French liner S.S. Louis Pasteur form Virginia to Casablanca, North Africa. The incredibly fast ship traveled alone with no convoy and made the crossing in just five days. Among the passengers was a man who became an enormously successful singer in later years.

The man known then as "Honey" Cole was later to succeed at Nat "King" Cole.

The time in North Africa is memorable for Nasser as he got to see such places as Algiers, Cairo, the pyramids and other Egyptian marvels. He traveled through much of that area on a troop train and by air. He remembers flying over Iraq and Iran on the way to India.

Many Winslow residents will likely remember another member of Army Air Corps Project 18. Santiago Garcia was also a member of that group. Sandy later worked for the Santa Fe Railroad in Ash Fork until his death. He was a school board member and a good friend to many who worked throughout that town for the railroad. Sandy and Emil were at times on the same crew of planes flying "over the hump" from India to China.

Nasser had enough flights to earn his Air Medal in his first six months in India. He eventually flew over 60 times over the Himalayas and should have earned a Distinguished Flying Cross. This medal was withheld because regulations would have required his transfer after that much service and the base commanders did not want to have to replace their skilled crew chief. Consequently, Nasser was still flying missions over the hump when the United States dropped atomic bombs on Japan and the war ended.

After just a few months of celebration and relaxation at Miami, it was back to college for Nasser in January of 1946. He was back on the football team for his last year in the 1946 season.

After graduation, Nasser went to camp with the Los Angeles Dons of the All America Football League. That team later became the San Diego Chargers. He elected to forgo professional football and signed a contract with Winslow High School and began a long and illustrious career building the Winslow Bulldogs program.