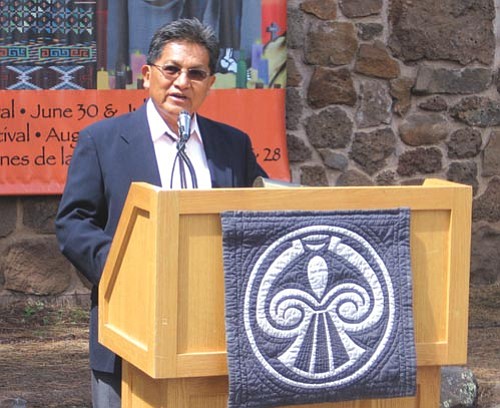 This action was likened to a tactical coup by Chairman Benjamin Nuvamsa - who was on travel that day. Other representatives were absent, believing that the meeting had been canceled, according to Nuvamsa.

"This is one more violation of the Tribal Constitution and of the voting rights of tribal members," Nuvamsa explained in an interview on Sept. 26. "By appointing their own representatives, the Tribal Council deprived members of the Village of First Mesa of their voting rights."

Nuvamsa maintains that the Sept. 15 meeting was illegal; that he and Felter worked together to move the meeting to the following day. He stated that he had drafted a memorandum to that effect and handed it to Felter for distribution.

"Felter and Honyaoma went ahead and attended the meeting. He took advantage of the lack of fully notified council representatives; and the Council seated three new delegates so that Honyaoma could get his own majority. Mr. Honyaoma has no authority to preside over any Tribal Council meetings; I have not delegated him that authority. Because the meeting was held illegally, no actions made during that meeting have force or effect," Nuvamsa said.

On Sept. 22, the Council passed Tribal Council Resolution No. H-074-2008, suspending "all delegations of authorities previously delegated by the Tribal Council to the Office of the Chairman or Mr. Benjamin H. Nuvamsa as Chairman of the Hopi Tribal Council" and "immediately stopping: all travels for the Chairman, usage of tribal budget by the Chairman and Tribal administration to pay Chairman's appointed staff..."

"I think it's time that the federal government steps in. I have written a letter today to the acting assistant secretary of Indian Affairs - it's time to take a look at the corruption in the Hopi Tribal Government," stated Nuvamsa.

Commenting on the letter, Nuvamsa cited what he believed to be other illegal actions, including efforts to terminate the chief prosecutor of the Hopi Tribe and the purported intimidation of finance, procurement and personnel departments to carry out improper actions.

"The state of affairs here compromises our ability to carry out the official services and duties of the Hopi Tribal Government," Nuvamsa said.

"I would also remind Honyaoma that he resigned at a public council meeting but he is still acting like the Vice Chairman. He also used tribal funds to pay over $87,000 for his attorney in the lawsuit I filed against him. I will see him prosecuted for this."

Numvamsa believes that the Vice Chairman and the Council do not like the hard stand he has taken in areas like the Black Mesa mine, water rights and the environment.

"This is an attempt to muzzle me," Nuvamsa said. "There are negotiations taking place that require my involvement. The Council has suspended my authority, and this renders the government impotent. I must carry out the duties as CEO and Chairman of the Hopi Tribe.

"My rights to travel have been removed; I was unable to attend important meetings on the uranium contamination from the Tuba City Open Dump on Wednesday and Thursday; we will suffer delays in the budget development for FY09. This action by the Council impacts the well-being of the villages and of tribal programs," Nuvamsa explained.

In a memorandum circulated to the press by Bertha Parker, the author recognized Nuvamsa's claim that he had reached an understanding with Felter that the meeting of the 15th would be moved to the 16th, and that he had drafted a memorandum to that effect, however that "[a]t the end of the first day's [sic] of the quarterly meeting... Chairman Nuvamsa 'recessed' the meeting until Sept. 15 ... it was not 'adjourned,'the memorandum continued, citing Hopi Resolution H-26-96, (Hopi By-laws, Section 13, "Recess" and "Adjournment" Distinguished).

In explanation of actions taken against the council representatives who were removed, the memorandum stated that the First Mesa Consolidated Villages are composed of Walpi, Sichmovi and Tewa - that these villages are not recognized as independent and separate villages by the Hopi Constitution, and as one entity are governed by a traditional government headed by a Kikmongwi.

"Section Five of the Hopi Constitution recognizes the traditional leadership and states that 'Representatives shall be recognized by the Council only if they are certified by the Kikmongwi of their respective villages. Certifications may be made in writing or in person.'

The reader is left to make the assumption that the council representatives who were removed had not received recognition from the Kikmongwi of First Mesa Consolidated Villages, and that the individuals who replaced them had such recognition.

In his letter to Skabine, Nuvamsa outlined his concerns over the Council's efforts to nullify and void the March 2007 Special Election, and described the lawsuit, Nuvamsa v. Honyaoma Sr. et al. (Case No. CV-2007-0068), wherein the Hopi Tribal Courts ruled the Council's actions as unconstitutional.

"In rendering this decision, the courts ruled that the defendants in this case were not covered under the Hopi Tribe's inherent right to sovereign immunity because they acted outside their constitutional authority," Nuvamsa wrote.

Nuvamsa also explained that the Hopi Tribal Consitution provides no authority for the council to "suspend" a chairman; further, Article V, Section 2 was violated in that less than two thirds of the council had made the decision to suspend him, nor had he been afforded full opportunity to hear the charges against him and to defend himself before the Council.

Nuvamsa said that the Council is discussing the reactivation of Action Item No. 055-2008, and that if passed will permanently remove all prior and existing authorities of his office, and to authorize the illegal use of tribal funds to pay attorney fees of the defendants in Nuvamsa v. Honyaoma, permit the illegal suspension of the tribal appellate court, dismantling of he 2008 tribal budget, and to reactivate Council Resolution No. H-036-2007, nullifying the 2007 special election.

"We are currently not serving the best interests of the Hopi and Tewa people," Nuvamsa said. "The illegal actions of Honyaoma and Felter, under advisement from Scott Canty and Ivan Sidney Sr., casts serious doubt on the stability of the tribal government and warrants immediate investigation by the Secretary of the Interior and the Department of Justice. It may warrant DOI and Department of Health and Human Services to consider reassumption procedures under the provisions of the Indian Self-Determination and Education Assistance Act. This obviously also affects federal programs we operate."