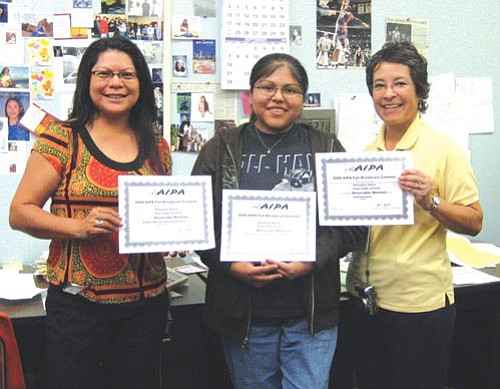 Patti Talahongva and Anita Luera presented the awards during a gathering at Hopi High School Sept. 18. Talahongva, who is Hopi, is a freelance journalist. Luera is the outreach director from the Arizona State University Cronkite School of Journalism and Mass Communications.

Davis Maho, operations assistant at KUYI, also participated in the ceremony. He received credit for recording the statewide winners' work before it was sent to AIPA. Maho said he enjoys working with the students and congratulated them on their honors.

Stan Bindell, radio and journalism teacher at Hopi High, praised the students for excelling at their craft.

"We need to put these awards in perspective. Unlike sports, which compete in their same division at state, the small schools and large schools are altogether at AIPA. So, for a small school to win this many awards at state is phenomenal," he said.

Quamahongnewa, who wants to major in sports broadcasting in college, won honorable mention for sportscast in baseball and track.

Mansfield, who served as the Hopi High Teen Show's environmental editor last school year, won honorable mention for two environmental pieces. The first was about the endangered Mexican Vole and the second was about the need for more protection for the bald eagle in Arizona.

Yoyokie won honorable mention for a feature story about then Hopi High student Marie Maho and a commentary about the need for more roadblocks to deal with alcoholism on the Hopi Reservation.

In the journalism division, Leyva won an honorable mention for her sports story about "Hopi girls win doubleheader." Leyva is currently serving as editor of the Hopi High Bruin Times.