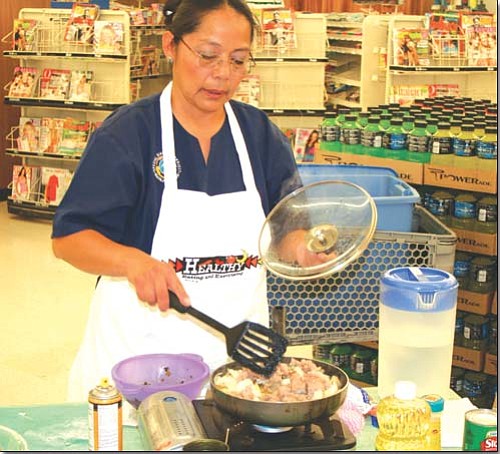 SHIPROCK, N.M. - Shoppers at the City Market at the Tse Bi'ta'i Shopping Center received some helpful tips about cooking with vegetable oil or spray instead of shortening or grease from Lena Guerito, a nutritionist with the Navajo Nation Special Diabetes Project (NNSDP) on behalf of the Healthy Stores program for the Navajo Nation.

The Healthy Stores program is an intervention trial to develop and evaluate a program to improve the availability of healthy foods in stores on the Navajo Nation.

It is funded by the United States Department of Agriculture and based at Basha's Stores, Shiprock City Market, and other local food stores. The project is working with the stores to stock and promote healthier foods for shoppers to choose from and working with community to educate and teach people about healthier foods, reading food labels, showing healthy recipes, food demonstrations, and talking with families at the stores.

Guerito prepared ground turkey meat mixed with potatoes, onions and spinach sprinkled with Mrs. Dash for seasoning during her food demonstration. Shoppers stopped by and watched the demonstration and then remained to taste the dish.

Guerito did not use any oil to brown the turkey meat, which looked like regular ground beef, but "with a lot less fat." She then placed it into a bowl and rinsed it with water. While the meat was draining, Guerito placed the diced potatoes with skin into the frying pan without adding any oil. Once the potatoes warmed up, she added a couple squirts of spray, stirred it and then covered it for several minutes. She added half cup of water and steamed the potatoes until they were almost done, then she added onions and finished cooking.

When the potatoes were done, she added the turkey meat and warmed it through before adding a can of spinach for the needed zesty taste. She heated it through and stirred it a couple of times before serving.

"This really tastes good," said a gentleman who did not want to identify himself. "I did not know you can cook without using much oil. At home, we put in two large spoons of shortening just to fry our potatoes. The way you cooked this, you can't taste the oil, but you can actually taste the meat, onions and spinach when you use very little spray."

Other ladies parked their shopping carts and tasted the food and were delighted with the taste and the ingredients. They said they would go back and try it for their families. One young girl took the plate, looked at it for a while then decided to decline because she noticed the spinach and onions. Guerito later cooked the same dish but used green beans instead of spinach and some people said they liked the taste better that way rather than with the spinach.

Guerito encouraged nearly 75 shoppers during the three hours she was there to use vegetables in their cooking and less oil.

The research that the Healthy Stores program is conducting in conjunction with NNSDP is important since Native Americans suffer from diseases like diabetes and heart problems at much higher rates than other Americans in part due to the foods they eat. Obesity is major a risk factor (you have more chance of getting the disease) for diabetes and heart disease.

The stores that are participating during this first round include: Crownpoint Basha's, Dilkon Basha's, Pinon Basha's, Shiprock City Market, Tuba City Basha's, and some smaller stores within 25 miles radius of these supermarkets.

In the next round, starting in January, the Healthy Stores program will be working with the following stores and smaller stores within 25 miles radius: Chinle Basha's, Kayenta Basha's, Page Basha's, Window Rock Basha's, Winslow Basha's and large food stores in Farmington.