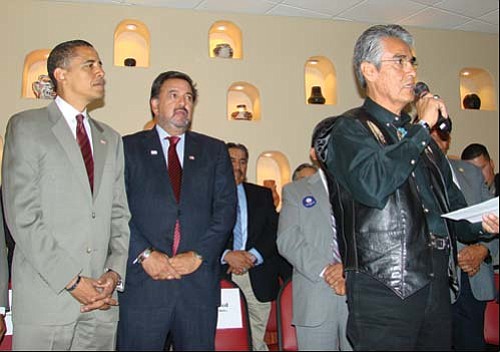 ALBUQUERQUE, N.M. - Navajo Nation President Joe Shirley Jr. on Sept. 18 endorsed Sen. Barack Obama for president at a meeting of tribal leaders from across the country.

"I am honored today to stand before you, as the elected leader of the Navajo people, to introduce the next president of the United States - Barack Obama," said President Shirley before a room full of some 100 leaders at the Indian Pueblo Culture Center in Albuquerque.

"For eight years, we have lived with federal policies that erode our culture and language and, therefore, attack our very identity as Native people," President Shirley said.

"For eight years, we have watched our nation's riches poured into the sands of the Middle East in an ill-advised war, and now, because of poor regulation over the last eight years, we see tens of billions more spent to save our financial institutions," said President Shirley as he repudiated the administration for its record on Indian legislation and appropriations.

"It is time for change - a real change. It is time for the United States of America to truly honor its obligations to its Native peoples," continued President Shirley.

Among the group of tribal leaders who gathered at the Indian Pueblo Culture Center included New Mexico Gov. Bill Richardson.

Richardson has been a strong supporter of Sen. Obama's bid for the presidency and a friend and advocate for the Navajo people.

President Shirley called on tribal leaders from "New Mexico, Arizona, the Southwest, and in all of Native America" to join him in his support of Sen. Obama.

"That is why I come before you today in support of Barack Obama to be the next president of the United States," said President Shirley amid a room full of cheers and shouts in support of Obama for President.

"I ask you all to join me in turning out the Native vote for Barack Obama this November. Let's together fight for the health and well-being of our people," said President Shirley as he concluded his remarks.

Sen. Obama met with tribal leaders in June and August this year in Albuquerque, and now carries the endorsement of the leader of the nation's largest tribe.