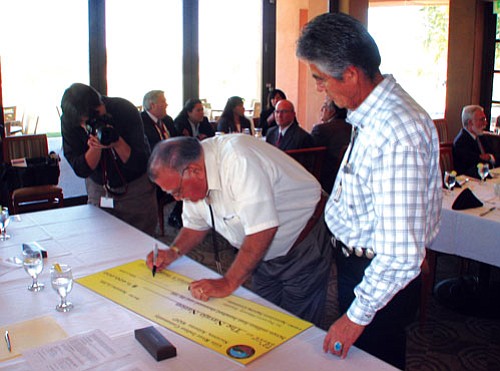 GILA RIVER INDIAN COMMUNITY, Ariz. ­ - Navajo Nation President Joe Shirley Jr. on Sept. 15 received a check for $7.4 million from the Gila River Indian Community for the lease of 411 slot machines as part of a historic pooling agreement with three tribes that will bring more than $130 million to the Navajo Nation over the next 17 years.

The agreement, which President Shirley called an act of sovereignty among the Navajo Nation, the Gila River Indian Community, the Fort McDowell Yavapai Nation, and the Tohono O'odham Nation, follows more than a year-and-a-half of work.

In remarks during the signing ceremony here, President Shirley expressed his appreciation to the leaders of the tribes ­ Governor William Rhodes, President Clinton Pattea and Chairman Ned Norris.

"It's always good to be working together, complementing each other as native nations," President Shirley said. "Throughout my travels throughout Native America, throughout the 50 states and even across the big waters to other countries, I've been espousing working together. We're all on the same side. We should be standing together."

Last summer, the Navajo Nation became the first tribe ever to invoke the pooling provisions of its gaming compact with the state of Arizona. Based on population, it had been allocated 2,400 slot machines and received an increase of an additional 450 machines last spring.

It placed some 1,050 machines not needed for its own gaming operations into a pool and invited other Arizona gaming tribes to bid on them.

As a result of that first-ever auction, the Navajo Nation negotiated with the tribes to lease 180 machines to the Fort McDowell Yavapai Nation and 454 machines to the Tohono O'odham Nation.

The agreements will allow the Navajo Nation to use the payment stream as collateral for future loans. The approach guarantees a future source of revenue for the Navajo Nation as well as flexibility to seek loans for other casino developments.

He also thanked the Navajo Nation's Economic Development Committee and its chairman, Lawrence Platero, and the Intergovernmental Relations Committee for their approval of the agreements in July. He expressed his appreciation to Arizona Department of Gaming Director Paul Bullis.

Gila River Indian Community Governor Rhodes said his tribe would use the machines received through the agreement in his tribe's new Wild Horse Casino, now under construction. He called the agreement a "true win-win for casino patrons."

He recalled May 12, 1992, when the FBI and U.S. Marshals temporarily shut down six tribal casinos in Arizona.

"They raided the casinos with their rifles and their Mayflower vans," President Pattea said. "They loaded up all of our machines in those vans and took it away from us. However, at Fort McDowell we said, "No, you couldn't do that." We said we have sovereignty, we have self-determination, and we want to keep our casinos open."

Tohono O'odham Nation Chairman Ned Norris said tribes have come a long way from establishing their sovereignty, gaining the right to operate casinos through the federal Indian Gaming Regulatory Act of 1988, and, now, exercising their rights to negotiate among themselves for the benefit of their tribes.

"I remember when there was nothing there, ­ just desert," he said. "Now you can see that structure coming up."

He said gaming has allowed tribes to care for the needs of their people through housing, scholarships, and alleviating third world conditions.

"What we're doing today is an act of tribal sovereignty, is an acknowledgment by the state that the tribes are sovereign," Chairman Norris said. "But these sovereigns have come together to work out a plan, to work out an opportunity to help benefit the Navajo Nation."

"I think we all know now that it takes some big money to do big things so we're trying to do some big things back on Navajo," President Shirley said.

"We're all on the same side making war against the real culprits out there, whether it be famine, thirst, greed or the jealousies that are out there. These are the real culprits that prey on all mankind. There are many challenges that face all of us and it behooves us to work together."