Harrison convicted of first degree murder
Galareka Harrison found guilty on all counts in the death of Mia J. Henderson, including counts of forgery and ID theft 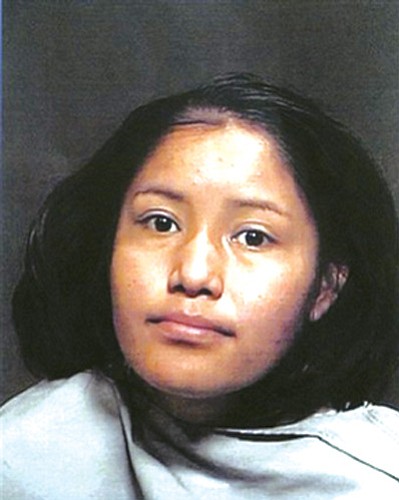 Galareka Harrison was found guilty Sept. 19 on charges of first degree murder, three counts of forgery and one count of identity theft. Harrison pleaded not guilty.

TUBA CITY, Ariz. - Most of Tuba City-Moencopi communities held their breath for a verdict after a year-long wait during the trial of Galareka Harrison of Many Farms, Ariz. who was accused of stabbing a promising Tuba City High School student and one of their youngest community members, Mia Janelle Henderson.

Henderson, age 18 at the time, shared a University of Arizona dorm room with Harrison.

Harrison was found guilty of all five charges, including first degree murder, three counts of forgery and one count of identity theft.

Warner has two options for sentencing Harrison. She could see that Harrison spends the rest of her natural life in prison or send her to prison with a possible release after 25 years. Prosecutors had decided not to seek the death penalty. Sentencing is set for November.

It has been the usual state practice to sentence after a conviction within 30 days, but Warner gave extra time to both sides of this case to prepare either letters or video tapes of support of what interested parties feel would be an appropriate sentence for Harrison.

In addition to the murder charge, Warner will also sentence Harrison on the three counts of forgery, and one count of identity theft. All four charges carry potential prison sentences of 1-3.75 years. These can run concurrently or consecutively.

Prosecutor Rick Unklesbay in his closing argument, said that the case "was one of overwhelming premeditated murder."

Unklesbay said Harrison had planned for days to act against her roommate after Henderson had accused her of stealing her student ID debit card, a Social Security card and $500 from her personal checking account.

He also said that Harrison lied repeatedly to police after the stabbing, calling Henderson a "master manipulator."

After Harrison did admit to stabbing Henderson, she still insisted that she had done it in self-defense.

Prosecutors presented evidence that Harrison had spoken with another university student acquaintance during a long drive back to their home Navajo reservation about fingerprint evidence, a "suicidal friend" and that Harrison had even typed up a fake suicide note at the U of A library pretending to be Henderson, and that Harrison had bought an eight-inch kitchen knife the day before the fatal incident.

Harrison was characterized by public defender John O'Brien as "scared, confused, a young woman who found herself unwanted by Henderson as a roommate and worried that she might be prosecuted for the theft allegations."

The final autopsy report shared by David Winston, pathologist at Pima County Forensics Science Center, who testified during the trial, revealed that Henderson was stabbed over 20 times, 14 of these wounds to her back with the deepest wound 7 1/2 inches into her right kidney.

Another wound at Henderson's neck reached 4 1/2 inches with another deep 3 inch cut to her left cheek.

In total seven main organs were struck, including Henderson's kidney, liver and lungs.

Henderson was pronounced dead shortly after being transported to the University Medical Center.

"It is not issue of who killed Mia Henderson," said Deputy County Attorney Kellie Johnson said in her Sept. 11 opening statement, "but rather if it's for ... premeditated murder."

The jury also voted on whether to speak to the media after the verdict with nine jurors agreeing to discuss their conclusion publicly.

Jury Foreman Roberts said, "There wasn't one single piece of evidence that led to the conviction, but the letter, the knife purchase and Harrison's taped statement were overwhelming evidence of her guilt. When we broke it down to the basic pieces, the story told itself."

Harrison did not take the stand and O'Brien chose not to put any other witnesses on the stand.

In total, prosecutors questioned 15 witnesses, including several of Mia Henderson's classmates from Tuba City High who also attend University of Arizona who were housed in the same dorm.

With several of the Henderson's close friends with them during the entire trial event, cell phone calls, e-mail and text messaging was heavy on Friday afternoon back to northern Arizona-Tuba City, with the news of Harrison's conviction.

Though tears of loss have been cried for Henderson over the past year from her hometown of Tuba City and Moencopi, there were also expressions of quiet concern for Harrison's family, located in Many Farms, which is located on the eastern side of the Navajo reservation, far away from the western reservation area.

"Its just so tragic that two young, beautiful Native women like this, who were at the start of their whole lives, that what was so promising and hopeful just a year ago, had to end up like this. As a parent, you just want your children to be safe and happy, this just made me worry about my own son, who is away at school in another state. I know my family wishes the best for Mia's family and hope this verdict will provide some healing," said one Tuba City High School mother.