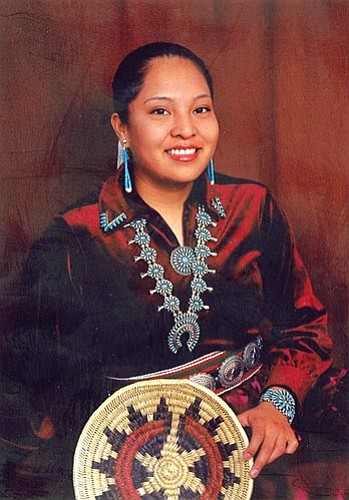 <i>NHO file photo</i><br> The late Mia Henderson, an outstanding academic and sport rising star of Tuba City and Moencopi communities is fondly remembered by her family, friends and teachers following her tragic death a little over one year ago.

TUCSON, Ariz. - After 3 1/2 hours, jurors deliberating in the case of 19-year-old Galareka Harrison handed down a guilty verdict against the young Diné woman accused of stabbing her University of Arizona (UA) roommate Mia Henderson to death on Sept. 5, 2007 and for later trying to make the slaying look like a suicide.

Harrison, who was charged with first-degree murder, three counts of forgery and one count of identity theft pleaded not guilty via Assistant Public Defender John O'Brien.

Harrison appeared via closed-circuit television from the Pima County Jail.

The young women were assigned as roommates in the Graham-Greenley Dormitory as part of the Native American First Year Scholar Program.

At just 18 years of age at the time of her death, Henderson, Diné, was one of Tuba City High School's most promising young scholars and athletes.

The granddaughter of a former vice chairman of the Navajo Nation, Henderson had a long list of academic accomplishments.

She was a Chief Manuelito scholar and National Honor Society member. She was also one of Tuba City High School's top ten seniors for 2007 and an outstanding softball player.

Kalen Smith, one of Henderson's former teachers related a story of how Henderson had returned to Tuba City last summer and made a special trip to each of her former teachers just to thank them for helping her become a successful college student.

"She was just so humble and I never knew a student to come back home and do this kind of thing," Smith said.

According to a court statement, Harrison allegedly purchased a knife on Sept. 5, 2007. She was allegedly upset with Henderson for accusing her of theft and forgery.

After purchasing the knife, Harrison wrote a note, saying the forgery was false and that Henderson wanted to end her own life according to the court document.

Harrison eventually admitted to stealing Henderson's social security card and cashing a check for $500 a few days before the slaying.

According to a lawsuit that Henderson's parents filed against UA, the state and the Board of Regents on July 15, Henderson had told the UA police a week before she died that Harrison had stolen her Social Security card, her UA CatCard, which is similar to a debit card, and that she also reported that Harrison had withdrawn the $500 from her bank account without her permission.

Henderson had also informed the dean of students, dormitory housing administrator and the Native American First Year Scholars Program what Harrison had done.

The lawsuit also states that Henderson asked for Harrison to be reassigned to another dorm room, but was ignored despite the fact that Harrison had confessed to a university police officer.

"The University was aware that Galareka was emotionally upset, fearful that she was being prosecuted, angry that Mia had reported her crimes and blamed Mia rather than her own criminal acts as the source of her difficulties, " the lawsuit states. "Some act of retribution by Galareka was reasonably forseeable and reasonable care required simple precautions for Mia's protection."

Deputy Pima County Attorney Rick Unklesbay characterized Harrison as a "master manipulator" after she had told "lie after lie after lie" to police.

According to the court report, Harrison initially told police she came to her dorm room early on the morning of Sept. 5, 2007 and found Henderson and an unknown man there.

Harrison said the man told Henderson to kill her.

When Henderson refused, the unknown man attacked Henderson with a knife. Harrison then said he turned the knife on her when she tried to help Henderson. Harrison managed to get away, and ran down the hall screaming for help.

Harrison also told police that it was Henderson who had been stealing from her, in secret and at gunpoint.

She also said Henderson had forced her to confess these thefts to a UA police officer.

A hearing to determine a motion to increase Harrison's bail from $50,000 to $1 million was set for 10:30 a.m. on Oct. 2 before Judge Nanette Warner by Pima County Superior Court hearing officer Roger Duncan.