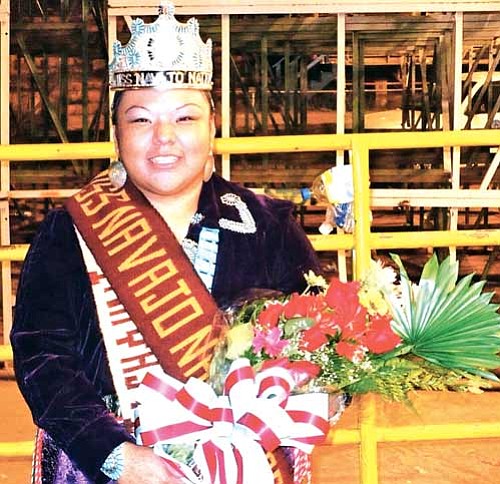 WINDOW ROCK, Ariz. - The 62nd Annual Navajo Nation Fair and Rodeo recognized Navajo Women this year with its theme "Navajo Women. Our Strength, Our Endurance" during the fair's week-long run, beginning with the Open Indian Master Rodeo and ending with the All Indian Rodeo on Sunday.

The highlight of the annual event included the Miss Navajo Nation Pageant. A near-capacity crowd braved the cool summer evening temperatures to witness the crowning of the 2008-2009 Miss Navajo Nation following the night performances at the Dean C. Jackson Memorial Arena.

This year, 20-year-old Yolanda Charley of Chi-Chil-Tah, N.M. was chosen by the committee to carry on the role and responsibilities of the Office of Miss Navajo Nation. She is the 2007-2008 Miss Eastern Navajo. She is of the Tabaaha' clan (Water Edge People) and born for the Kiyaa'aanii (Towering House People). Her maternal grandfathers are the Ti'aashehi'i (Red Bottom People) and her paternal grandfathers are the Naakai Dine'e (Mexican People). Her proud parents are Clara Kehoe and Benjamin Charley.

"My plans are to travel among the Diné throughout the four regions, sharing the teaching and love of my grandmother, focusing on the Diné children and those with special needs, I plan to work with the special Olympics activities," she said, "I love to sing, especially native songs."

"After my reign as Miss Navajo, I plan to attend school and major in music and open my own recording studio," she said.

First runner-up and alternative to Miss Navajo is Danielle Goldtooth of Farmington, N.M. She is of the Tse'nijikin'i clan (Honey Combed Rock People), born for the Ogallala Lakota Sioux and was selected as Miss Congeniality. Her parents are Carole Goldtooth and Steven Semken.

Third runner-up was Rikki Watchman of Ya-Ta-Hey, N.M. She is 19-years-old and is of the Tsi'naajinii clan (Black-Streaked Wood People) born for the T'achii'nii (Red Running into the Water People). Her parents are Betty Estrada and Henry James Watchman.

Eighteen-year-old Lastasha Tom of Blue Canyon, Ariz. was fourth runner-up. She is of the Ta'chii'nii (Red Running into the Water People clan) and born for To'ahani (Near the Water clan). Her proud parents are Albert and Kateri Tom.