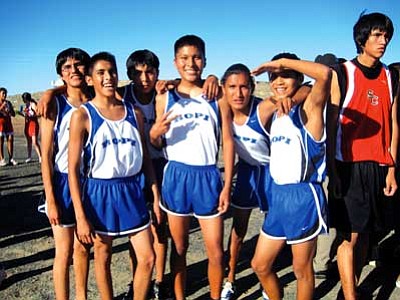 Host Hopi High School took third in the boys race and fourth in the girls race finishing behind larger schools. More than 400 runners from 22 schools participated in the races that included an open race for the junior varsity boys and girls teams.

Yazzie, a junior, placed seventh in this race last year. But he ran at least four to six miles a day six days a week during the summer as he prepared for this race and the season.

"It's what we predicted and hoped," he said about his first place and his teammates second place finish.

Yazzie said his teammates helped him a lot.

"This was a very good race for us even though we have a lot of newcomers," he said.

Yazzie said the weather, in the low 80s, was just right and called the course perfect. But, he added, he was surprised that Snowflake's Cody Wells and Hopi's Ronnie Laban weren't closer to him at the finish.

Yazzie hopes to earn a cross country scholarship to UCLA where he would major in math. He maintains a B/C average. He also plays basketball and runs track.

The rest of the top five runners for Hopi were: Justin Secakuku, 20th; Joshua Satala, 23rd; Brennon Sidney, 24th; and Clayden Torivio, 50th. Hopi High was missing two of its top seven runners; one was ill and another was injured.

The Lady Sand Devils won with 66 points, Tuba City second with 98, Chinle third with 112 and Hopi fourth with 127.

Jumbo, a freshman, said she was surprised at her individual championship because she stayed close to most of her teammates for most of the race.

Jumbo won several races as a junior high student last year, but winning her first race as a high school student was a big deal for the shy student.

Jumbo said she wasn't even aware of how close the runners behind her were. She said the weather was good and she liked the course. She will also run track.

Jumbo, an A/B student, hopes to get a cross country scholarship to Kansas State, but she doesn't know what she wants to major in.