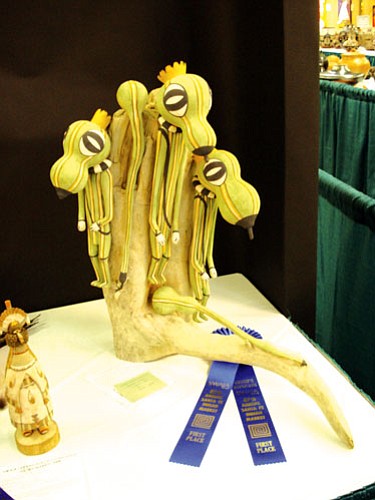 SANTA FE, N.M. - It was the first time that an artist won awards in two separate categories including Best of Show at the 87th Annual SWAIA Indian Market in Santa Fe.

Harvey's second major win of the night - a large six-foot-tall piece made of raw wood assemblage based on the Navajo twin heroes legend who destroyed monsters and made the world safe for all mankind - took the Best in Category for Sculpture division.

Harvey, a mere 29-years-old, slipped in quietly to the private award ceremony at El Museo almost an hour late. Officials had trouble locating him initially, but eventually found him painting late at his studio in Albuquerque and was immediately swamped by both admirers and collectors as soon as SWAIA made its formal announcement to the media and private collectors attending the invitation only event.

A private collector from Las Vegas wanted to buy Harvey's painting immediately and was ready to give Harvey a check on the spot, but was reminded that any art purchases would have to wait until the formal start of Indian Market at 7 a.m. on Saturday morning. Judging from the interest in the winning work of this young painter-sculptor, the Vegas collector was only one of several who wanted to purchase something from this top winner.

Harvey, who has been getting serious art attention since the jump start of his career in 2005, won his first big awards in both sculpture and painting, also in Santa Fe, and has won consistently each year at market ever since.

His work has been featured in several major New Mexico galleries, particularly Santa Fe and also Gallup, since that is closest to his home reservation. This newest win and attention will only serve to catapult Harvey's work to newer, more worldwide art heights.

One of the youngest potters to take home a category award this year, is Garrett Maho of First Mesa.

Maho was stunned to see his pottery sculpture win surrounded by winner's ribbons the evening of the SWAIA preview show on Friday night. Maho's parents, who also were in Santa Fe for the weekend art event, expressed their proud sentiments of their son's entry.

"This is Garrett's first big win and I am so happy that his dad and I were here along with his brother to share this special evening. We are really proud of his work and glad that the judges are able to recognize how much he puts into his pots," Maho's mother said.

Winning for kachina carving were Clark Tenakhongva of Hotevilla Village, with the remaining winners all from Upper or Lower Mungapi villages in Tuba City including David Jensen, Arthur Holmes Jr, Stetson Honyumptewa, Loren Phillips and Mark Taho, with top carving winner Robert Albert of Moencopi who won for Best of Classification for Pueblo Carving.

Also taking home the award for 2008 Lifetime Achievement along with her husband Lawrence Saufkie, was Griselda Saufkie, Hopi, from Shungopavy Village, who also won the Jean Seth Award for Traditional Basketry.

A big interest in beadwork yielded many entries this year. There were also a record number of youth entries, making this year the most entries for all categories of artwork.

In all, over 1,000 art entries were taken in by Thursday's receiving event that lasted from 10 a.m. until almost 6:30 p.m. Although the doors for these art entries formally closed at 4 p.m., the line for artist submittals was standing room only.

Technology art also had more entries this year with a winning entry by Marla Allison, who is of Hopi and Santa Clara tribal descent. She won the Eric and Barbara Dobkin Award for Innovation with her oil painting of her mother at Shungopavy that featured a small video insert of her family history.

Allison's mixed tribal and Anglo heritage has a great influence over her extremely modern work and this showed in the video feature of her grandfather's history working for the Santa Fe railroad, her siblings and her time spent on the reservation at both Santa Clara and Second Mesa as well as her Anglo side of the family.