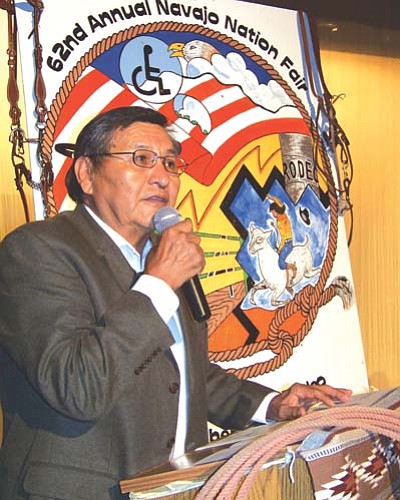 The signing of the proclamation makes the branch chiefs aware of the special needs of children with disabilities and the purpose in making the event available for them.

"This is a wonderful annual tradition because these are our relatives, our children, who are disabled in some fashion," President Shirley said. "It does us all good to recognize them and what they bring into our families."

The planning team invites children with disabilities in kindergarten through eighth grade from across the Navajo Nation to the annual rodeo held in their honor. Among the many events planned for this year's exceptional rodeo are Wild West Photographs, Lickity Split Barrel Racing, Brush and Shine Horse Grooming, Kidz Kowboy Roping, the Pony Express Ride, pole bending, old-fashioned wagon ride and the ever-popular Mighty Bucky Bull-o-rama.

The fourth rodeo for the Navajo Nation is one that the planning team recognizes as a sacred event that solidifies its importance and continuation at the peoples' fair.

During the proclamation signing ceremony at the Navajo Nation Museum, Vice President Shelly said, "Let's get more involved on behalf of our kids. They're our kids." Last year, Shelly helped to open the ceremonies at the exceptional rodeo.

The planning team members were thanked for their volunteer time and effort to put on the exceptional rodeo.

This year there are 19 planning team members, who rely on the volunteers who show up on the day of the rodeo to guide children through the courses. Sponsors contribute money each year to make the rodeo a reality.

Registration forms for participants and for volunteers are available on the Navajo Nation Fair's official Web site at www.navajonationfair.com/nnf08/htm/erodeo.html.