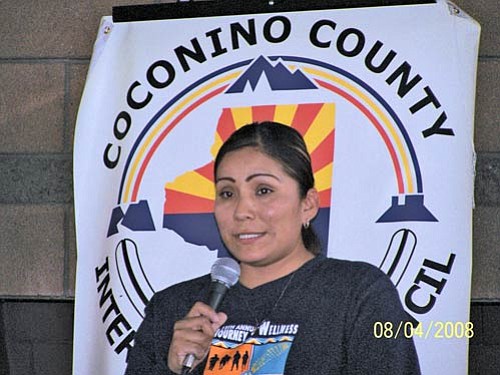 "The meetings were a success and I hope we can keep the momentum going to successfully organize an effective park watch group here in Tuba City," said Louise Yellowman, Coconino County District 5 Supervisor.

"Many of the attendees provided impressive comments, suggestions and concerns, especially from parents and the youth who utilize the park everyday," said Yellowman.

Several youths who attended the meeting pleaded with officials, "Don't close the park," stating that it was the only place where they could freely skateboard and ride their bikes without getting into trouble.

All participants in the meetings agreed there is need for community and parental supervision and involvement to stop vandalism in the park. Some of the suggestions offered included establishing a nightly curfew, possible incentives from McDonald's for youth who clean up the park, and installing more lights and putting in a volleyball court in an undeveloped corner of the park where park vandals tend to hang out.

One parent even suggested putting up a "freedom wall" where youth would be allowed to freely paint positive images (not graffiti) on a wall that would then be painted over each month.

Other proposed solutions included increased law enforcement patrols and the formation of a deputized watch group for the park. It is anticipated that the Coconino County Sheriff's Office will present information from their park watch program design handbook at the next meeting.

Much emphasis was placed on having more meetings and for more people to become involved with upkeep of the park.

Supervisor Yellowman thanked all the participants and everyone who made the meetings a success.

"The park is for all, young and old. Let us work together to keep it clean and beautiful for years to come," she said.

The next meeting is scheduled for Monday, Sept. 8. For more information, call Supervisor Yellowman's office at