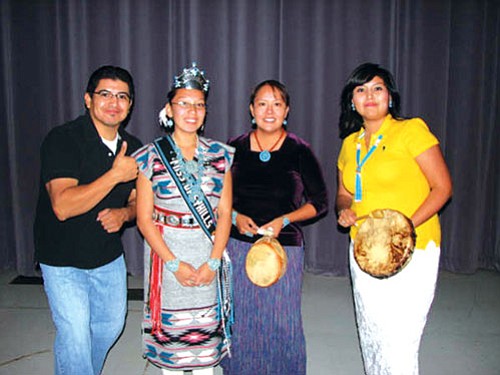 TUBA CITY, Ariz. - Emerging star and comedian Pax Harvey put an exclamation on comedy last week as Greyhills Academy High School Parent Services teamed up with Tuba City Department of Behavioral Health (TCDBH) through Prevention Specialist Gary Davis and Health Educator Cherlynn Manson to promote Red Ribbon Week. The event was initiated through Navajo Nation TCDBH, the lead agency in prevention services, encouraging and reaching out to schools and communities to be drug, alcohol and domestic violence free. With the audience numbering over 300 people, Harvey delivered a performance that echoed the building with laughter and for a 2 1/2 hour show. Goers were drug, alcohol and domestic violence free, building on the theme "Live Free and Fly High without Drugs."

Pax Harvey, who is from Lukachukai, credits his comedian career through the encouragement of well-known comedians James and Ernie. "James and Ernie said to me 'Hey you got some talent and have you ever take it to the stage' I was like, 'No I haven't yet and would really love that,' so they let me open a show for them and from there, James Junes said to me 'You have a gift. Go for it, do it,' and since then I have been doing it full time," Harvey said.

Harvey thanked Tuba City/Greyhills for their support. "I am honored and happy to be here, you guys are awesome," Harvey said. He traveled with his sister Roxanne Harvey, a Native singer, and Andrea Charlie, also a Native singer, who gave performances leaving the audience captivated with their beautiful voices. Special guests James Bilagody and Dennis Bowen, well known in Tuba City and other Native communities, assisted with their talents to promote Red Ribbon Awareness. Bilagody delivered his own comic relief as master of ceremonies to the event. Bowen did his rendition of famed singer James Brown and delighted the crowd of his humor while also delivering the message of being free of domestic violence, alcohol and drugs.

Red Ribbon Week remembers Drug Enforcement Agency Agent Enrique "Kiki" Camarena after he was kidnapped, tortured and killed in 1985. Agent Camarena's hometown of Calexico, Calif. the public outpouring of support turned in to an organized community response in which citizens wore red ribbons. They became a voice for prevention in order to reduce the demand for illegal drugs and illegal use of legal drugs in America. For more information, visit www.redribboncoalition.org.

Serving as a channel and seizing the opportunity to assist in serving parents, Greyhills Parent Services and the Miss Greyhills committee had 2008 Miss Greyhills Wiltrina Riggs and first runner-up Valentina Badoni on hand to welcome parents. Riggs and Badoni have represented the Knights well in promoting healthy living and participating in community events.

Collaborative efforts between area service providers allow for community events to draw on educational values and promote family structure and unity. Many in the audience were Knight Parents and were appreciative of efforts concerted towards family and health promotion. One parent said, "Thank you for bringing out these guys, it was fun. You should bring him back sometime soon."