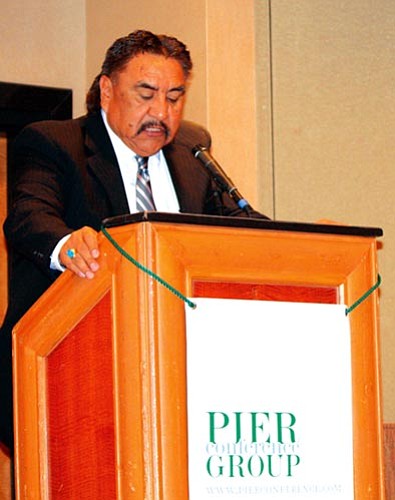 Speaker Morgan presented to tribal leaders, representatives and business associates from across the country.

During the three-day session, speakers and panelists discussed successes in Indian Country, economic diversification, project financing, design and construction of projects, the eroding of tribal sovereignty and the impacts of the U.S. Presidential Election in November.

Speaker Morgan said, "I look at economic development simply as improving the livelihoods and well being of people. This means establishing businesses that will create and provide jobs for the Navajo people, and tribal governments should also be there supporting this initiative by providing necessary governmental services to the people."

Speaker Morgan explained to the conference participants that pursuing economic development on the Navajo Nation is a tremendous task, considering the 26,000 square mile reservation that extends into the states of Arizona, New Mexico and Utah. The Navajo Nation's population is approximately 300,000 people with 110 political subdivisions, called chapters.

Speaker Morgan also explained the Navajo Nation's foremost challenge is keeping tribal dollars on their reservation. Navajo people tend to shop in border towns, where approximately 75 cents of every dollar is spent off the reservation, which contributes highly to the stagnant economy.

As a result of its deteriorating economy, the Navajo Nation will revisit and enhance its tourism business to identify areas where it can diversify its attractions. The Nation will create partnerships with municipal, county, state and federal agencies, in order to bring business onto its Nation.

The Navajo Nation is also supporting the expansion of their Oil and Gas Company, to enhance its ability to diversify to become key players in the oil and gas industry. Navajo agriculture is another business venture of the Navajo Nation, with products being shipped nationally and now internationally. The Navajo Nation's newest venture is the Council's approval of the gaming industry, which now makes Navajo a gaming tribe. The first casino is being built near Church Rock, N.M., a Navajo community east of Gallup, N.M, and other areas have been identified that are feasible for full-scale gaming facilities.

Speaker Morgan also explained that as an Indian Nation, one of the greatest accomplishments of the Navajo Nation was the removal of the Bureau of Indian Affairs from the administrative process of business-site leasing. In 2006, Navajo Nation leaders and officials from the BIA Navajo Regional Office signed an historic agreement that eliminated the BIA from the review and approval process for business-site leases and granted that authority to the Economic Development Committee of the Navajo Nation Council.

"I praise members of Navajo Nation Council, the Economic Development Committee, the Budget and Finance Committee and the Chapters for their leadership and guidance on this matter," Speaker Morgan said. "I would also like to pay special recognition to the Honorable Council Delegate Jonathan Nez of Shonto; Dolly Lane and Tincer Nez Sr. from the Western Navajo Regional Business Development Office; Karis Begay and Lotonia Becenti from the Navajo Nation Department of Justice; and to Henry Saltclah of the BIA Navajo Real Estate Department for their commitment in obtaining the Navajo Nation's authority in granting business-site leases."

"Our Navajo Nation Council strongly supports giving autonomy to our local governments, so they can become more self sufficient and they can determine their own destiny," Speaker Morgan added. "The Council's approval of the Local Governance Act allows Chapters to exercise more control over their own affairs. Shonto Chapter is a prime example of the results of Council action - they are practicing more local autonomy."

Speaker Morgan also mentioned that the current U.S. Presidential elections in November are very important and tribal leaders should encourage all of their people to vote.

"I read the position statements of both Obama and McCain, they both talked about how their administrations will deal with Native Americans and what they will do for us," Speaker Morgan said. "My question is, 'What about what we want?' We want both candidates to know that our tribal sovereignty needs to be recognized, respected and protected. We want our treaty obligations to be met and we have the right to make our own decisions and to continue to speak our own language, to practice our traditional ceremonies and to live according to our own culture."