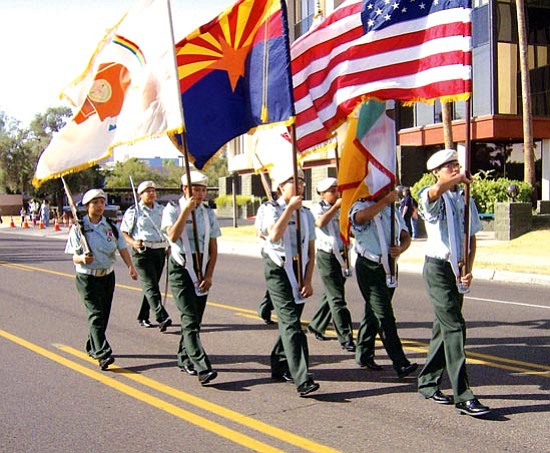 PHOENIX, Ariz. - The Hopi JROTC Battalion once again took the spotlight in the Native American Connections Parade held Oct. 11. After the Homecoming Parade at Hopi High School, 40 cadets promptly changed into civilian clothing and boarded the bus to head out to Phoenix. The morning of the parade was chilly, but once the cadets started to march, the day started to warm up. This raised the spirits of the cadets so they could be ready for the half-mile march down Indian School Road.

While the Color Guard marched ahead of the Hopi Bruin Battalion, Cadet Lieutenant Colonel Ryan Carl counted cadence for the cadets. As the cadets marched in they also shouted out cadence for the spectators along the sidewalk. The cadences they marched to were, "Hey Hopi," "1-7," "Batman" and "Lollipop."

By the end of the parade half of the cadets had lost their voices, but they still had enough energy to watch the parade until it ended. As the parade went on many of the cadets were amazed at how many Native Americans had participated in the parade, and how many other tribes were in Arizona. While they were watching the parade, a local high school singing group was generous enough to sing a song to the Hopi Bruin Battalion. After the parade the cadets boarded the bus and headed out to lunch.